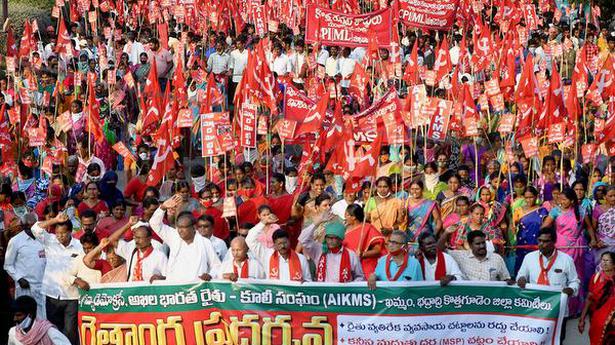 
Thousands of aggrieved farmers are spearheading the protests at Delhi against the farm laws relentlessly with resolute commitment to protect the farm sector, the backbone of the country’s economy and food security, said the All India Kisan Sangharsh Coordination Committee (AIKSSC) leader Ashish Mittal.

He was addressing a large gathering of farmers, agricultural workers and others at Rythu Garjana, a public meeting organised by the CPI (ML-New Democracy) district committee here late on Monday evening.

Earlier, a huge rally was held in the town to express solidarity with the agitating farmers and to press for immediate rollback of the Centre’s three farm laws. An array of cultural programmes were staged by the Arunodaya artists en route the rally in support of the agitating farmers.

In his speech at the Pavilion Grounds, Mr Ashish alleged that the pro-corporate farm laws would not only rob millions of farmers their traditional livelihoods but also deprive poor people of food security.

“Undeterred by intimidating tactics, the farmers are continuing their agitation with overwhelming support from all sections of the society,” he said, deploring that the BJP dispensation at the Centre was trying to “suppress” the farmers’ agitation by carrying out a “misinformation campaign.”

The need of the hour is to build united mass movements across the country in support of farmers (food givers) against the anti-farmer laws and mount pressure on the Centre repeal the “black laws”, he said.

Other speakers hit out at the TRS regime in the State for allegedly taking a “U-turn” on the Centre’s new farm laws.