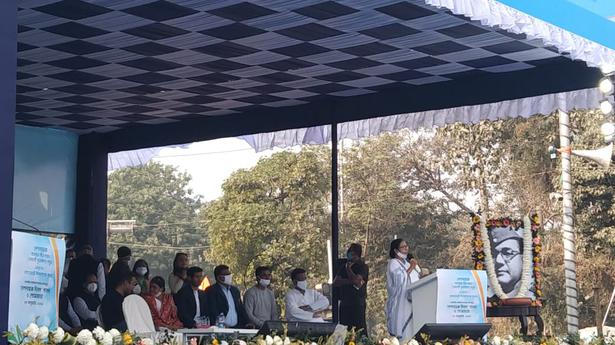 Both try to appropriate legacy of national icon.

The 125th birth anniversary of Netaji Subhas Chandra Bose has turned into a tug of war between the Centre and West Bengal government, with both trying to appropriate the legacy of the national icon.

Prime Minister Narendra Modi is scheduled to arrive in the city and participate in a number of events to observe the day as ‘Parakram Divas’.

The Union Ministry of Culture earlier this week announced that January 23, the birth anniversary of Netaji, would be celebrated as ‘Parakram Divas’ every year.

Ms. Banerjee, who arrived at the ancestral house of Netaji on Elgin Road, raised questions over the Centre observing the occasion as ‘Parakram Divas’. “I do not understand ‘Parakram,’ whether it is a Hindi, Bengali or an English word, but we understand that Netaji was the greatest ‘Desh Nayak’ [hero of the nation]. Therefore, we are observing the day as ‘Desh Nayak Divas,” she said.

She added that the term ‘Desh Nayak’ was bestowed on Netaji by Rabindranath Tagore.

The Chief Minister went on say that she had been in touch with the Netaji’s family over 365 days and not just before the election.

Netaji’s grandnephew and Harvard historian Sugata Bose said that during the day, Abid Hasan, an officer of Indian National Army, was posthumously awarded the Netaji medal.

Ms. Banerjee announced on social media that a monument, named after Azad Hind Fauj, would be built at Rajarhat. “A university named after Netaji is also being set up, which shall be funded entirely by the State, and will have tie-ups with foreign universities,” she tweeted.

She also called upon the Centre to declare January 23 as a national holiday.

The Chief Minister participated in an 8-km-long padayatra from Netaji statue at Shyambazar to Red Road in Kolkata.

The State government sounded a siren at 1215 hours, accompanied by blowing of a conch shell, to mark the birth of the national icon.

Mr. Modi tweeted, “I am honoured to be in your midst, that too on the auspicious day of #ParakramDivas. During the programmes in Kolkata, we will pay tribute to the brave Netaji Subhas Chandra Bose”.

The Prime Minister will preside over the inaugural function of the ‘Parakram Divas’ celebrations at Victoria Memorial here. “A permanent exhibition and a show on Netaji will be inaugurated on the occasion. A commemorative coin and postage stamp will also be released by the Prime Minister. A cultural programme “Amra Nuton Jouboneri Doot”, based on the theme of Netaji, will also be held,” a statement from PIB said.

‘Govt. should set up panel to frame regulations for online games’