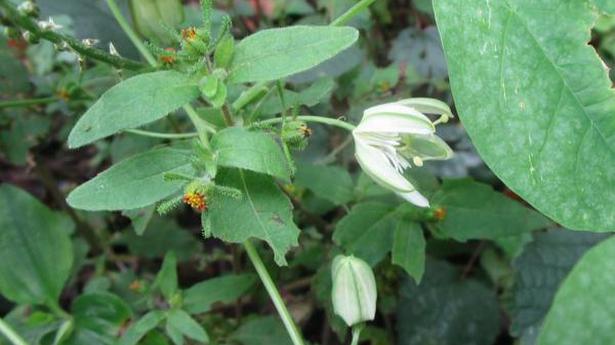 
A new native plant species belonging to the Passifloraceae — Passion fruit family — has been found by scientists of Chennai.

“It is a climber. We have named it as Passiflora shervarayensis because we found it in the Servarayan Hills and presented it at the International Conference on Innovative and Emerging Trends in Botany in 2019, held at Alagappa University, Karaikudi,” said S. Abdul Kader, Assistant Professor of Botany, Presidency College, who is the leader of the team that found the plant.

“We first found it in a coffee estate in Yercaud and again in Servararayan hills during our subsequent visits. We checked the existing literature on plant species and herbarium collections and could not find any description of the new species,” Mr. Abdul Kader said.

He said the genus Passiflora L. belonging to Passifloraceae family contains about 550 species and are distributed mostly in the Americas.

“Only about 20 species occur in India, China, Southeast Asia, Australia, and in the islands of Oceania. Of the 20 species only two of them are native to India. Now we have found one more native species,” he explained.

Asked how did he come to the conclusion that it was a new native species, Mr. Kader said of the 13 species so far documented in Tamil Nadu 12 were exotic.

“The new species resembles the exotic plant Passiflora. Suberosa L. in solitary axillary apetalous white flower. But its three-lobed leaves are extremely thin. It comparatively has a long petiole (leaf stalk) and pedicel (flower stalk) and short corona. The fruit is a green berry and turns red after ripening,” he said.

LPG consumers unable to use helpline