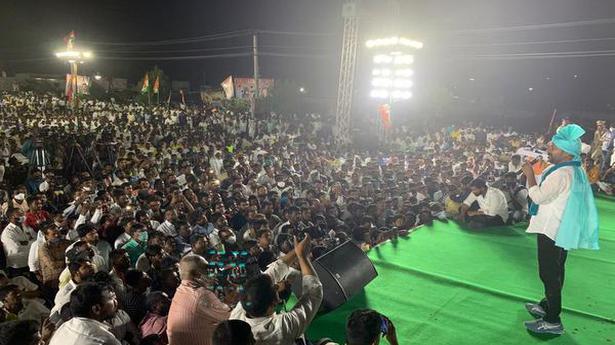 Former ministers, MPs and MLAs to the young future leaders of the Congress party described the 10-day Rajiv Rythu Bharosa padayatra of TPCC working president A. Revanth Reddy from Achampet to Hyderabad as a repeat of Y. S. Rajashekhara Reddy’s historic padayatra in 2002, and the one that turned the Congress leader into a people’s man.

The padayatra that culminated into a Rajiv Rythu Ranabheri public meeting at Raviryala on Tuesday saw most speakers comparing the walkathon to that of YSR’s padayatra that catapulted Congress party into power. “History will repeat and TRS will be decimated,” they claimed and said Congress was the only hope for the State and the nation to take on the BJP that is working for crony capitalists compromising the interests of the farmers.

Addressing the massive meeting, Mr. Revanth Reddy said he was forced to take up padayatra from Nallamalla forests after he realised the nexus of Prime Minister Narendra Modi and Chief Minister K. Chandrasekhar Rao to continue the farm laws. He also took a jibe at, albiet indirectly, at the leaders who tried to create hurdles in his padayatra. “Yet, the farmers and the Congress cadre turned up in big numbers and it shows how they are worried by the new laws.”

The Congress MP recalled that KCR has turned his back on the laws after his meeting with Narendra Modi. “KCR has belittled the sacrifices of the Telangana people by siding with Modi to save himself and his corrupt rule,” he alleged.

Terming the farm laws as black laws, Mr. Reddy warned that farmers will become victims of the capitalists and turn labourers in their own fields. The sadder part was the behaviour of the BJP government that is not moved by the deaths of more than hundred farmers at the protests site. That is why Rahul Gandhi and Priyanka Gandhi have come out on roads and are going to the people. “My inspiration for the padayatra is their way of going to the people.”

He said farmers’ leader Rakesh Tikait’s tears moved the country and sent shivers down the spine of Narendra Modi and Amit Shah, and that is the power of farmers. “Let’s be with those protesting farmers. It is our responsibility to ensure new farm laws are scrapped.”

Turning his ire against Chief Minister Chandrasekhar Rao ‘snatching’ farmers’ lands for the Pharma City, he challenged him to sell his 1,000 acres farm. We are willing to buy for the Pharma city, he said and asked if the CM was ready to sell his land.

The Congress leader also announced that he was willing to continue the padayatra in other districts to give confidence to the people, after taking permission from the AICC high command that has already directed the Congress leader and cadre to directly go to the farmers.