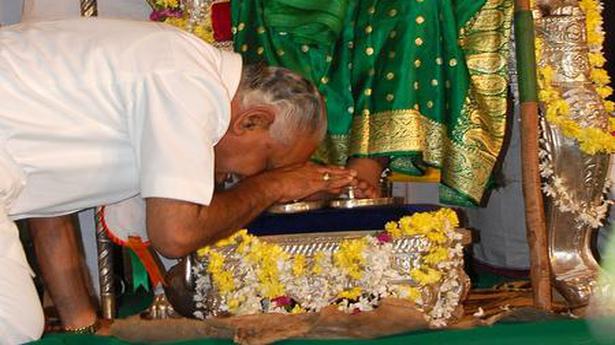 If Yediyurappa is removed as CM, it remains to be seen whether the community will desert BJP or stand by the party

Support for Karnataka Chief Minister B.S. Yediyurappa, following speculation that he has been asked by the BJP high command to quit his post, has been pouring in from Lingayat MLAs of the Congress and seers heading maths of the Lingayat community.

The community solidarity for Mr. Yediyurappa owes a lot to the long shadow that late Chief Minister Veerendra Patil has cast on State politics and the narrative of hurt feelings in the Lingayat community evoked as yet another Lingayat Chief Minister faces an abrupt exit.

The year was 1990 and the Congress had been ensconced in government in Karnataka with its largest majority ever, 179 out of the 224 seats in the Assembly, thanks to the mobilisation of Lingayat votes by Patil in a party that was already in possession of Vokkaliga support.

Patil, was, however, dismissed by the then Congress president Rajiv Gandhi just as the former was recovering from a stroke, after incidents of communal violence broke out in the background of the Rath Yatra connected to the Ram Janmabhoomi issue.

Gandhi, in fact, announced the dismissal of the Chief Minister before boarding an aircraft at the Bengaluru airport. Patil, weighed down by paralysis following the stroke, gave a statement to television saying he would not quit notwithstanding any diktats from the party high command.

Like Mr.Yediyurappa, Patil was defiant in terms of who he wanted to accommodate in his government, making factionalism a given in the party.

The then Janata Dal government at the Centre, seeing the stand-off between the Chief Minister and his legislature party (backed by the national leadership), imposed President’s Rule in the State where the ruling party had an absolute majority in the Assembly.

The legal aspects of it all aside, the Lingayat community, seeing the brutal dismissal of their ailing leader who had lead them into supporting the Congress, took it personally. When polls were held in 1994, the Congress was reduced to 36 seats from the 179 it got in 1989. This collapse of Lingayat support was beneficial to the BJP, which saw its vote share increase from around 4% in the State to 17%, and the Janata Dal.

Leadership issue in Karnataka: Community factor comes to the fore

The BJP went on to actively woo this vote bank, one of the two dominant and electorally decisive communities in Karnataka and formed its first government in the south in the early 2000s.

This cultivation of the Lingayat vote also saw the rise of Mr. Yediyurappa in State politics and as the major leader of the BJP. In 2013, following his removal from the BJP over corruption and other charges, he formed his own party, the Karnataka Janata Paksha, and reduced the then ruling BJP to third position in the State in the subsequent Assembly poll of 2013.

The BJP learnt from its mistakes as Prime Minister Narendra Modi prepared to take the mantle of national leadership. Mr. Yediyurappa was rehabilitated in the party and was its chief ministerial face in the 2018 polls.

Who are the Lingayats and what are their demands?

The parade of support for Mr. Yediyurappa from Congress MLAs M.B. Patil and Shamanur Shankarappa, who belong to the Lingayat community, is as much about acknowledging the ill-treatment of Patil within the Congress as it is about fishing in troubled waters.

For Lingayat seers, the imminent removal of a Chief Minister from the community again at the diktat of Delhi is a case of history repeating itself. At the heart of it is a tug of war between party high commands looking for pliable Chief Ministers and the assertiveness of leaders with a mass base.

At the most core of all this unfolding drama is the question of whether the Lingayat community will follow the lead of the seers and the Congress MLAs and desert the BJP if Mr. Yediyurappa is removed or will it, defying history, transfer its loyalty to the party. A painful journey through the rough road to Meghane

First dose coverage yet to be completed