The next 20 days will be challenging in the fight against COVID-19 as it is festive season. Therefore, public should remain safe, vigilant and follow safety guideline, Chief Secretary K. Shanmugam told newsmen after holding a review meeting at the Coimbatore Collectorate on Sunday.

The everyday COVID-19 positive count that was around 500 in October had now come down to 200 – 220. But it was not the time to let down the guard. Officials should increase vigil, educate shopkeepers and salespersons on COVID-19 safety guideline and also ensure that it was followed in the shops. Use of mask helped reduce the infection spread by 40%. Officials should ensure that the members of the public wore mask.

The percentage of people who succumbed to COVID-19 stood at 1.27 in the district. The administration should take steps to reduce it to less than 1, said a release quoting the Chief Secretary.

Suggesting that the administration devise location-specific strategy depending on population and population density to contain the infection spread, the top officer asked the administration officials to set up sample collection centres at markets, bus stands and at places where people gathered in large number.

And, if people turned positive, the officials should immediately rush to their neighbourhood, conduct fever camps and put in place containment measures, if necessary.

At factories or establishments were a large number of people turned up for work, the management should put in place measures to have every worker or employee checked. It should specifically focus on those who return to work after leave or holiday.

While complimenting the district administration for reducing the daily positive count in the district, which was next only to Chennai, he said more needed to be done to reduce the active cases.

Mr. Shanmugam, at the press meet, also asked officials to focus on peri-urban villages to reduce the infection spread while keeping a tab on the five corporation zones in the city. 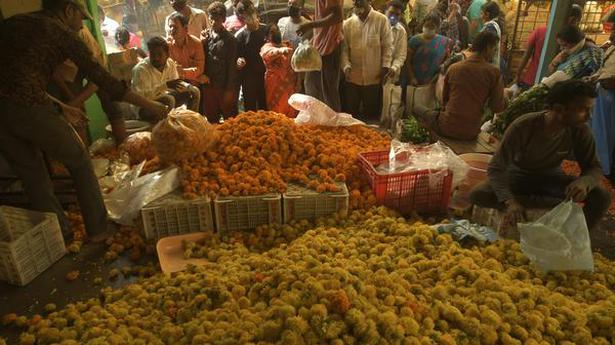