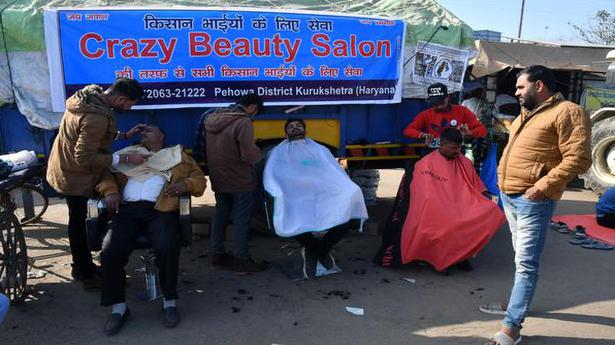 
A ‘salon sewa’ was added on Wednesday by a Haryana-based youth to the long list of free services being offered at the Singhu border protest site.

On the right side of the road, where thousands of protesters are agitating agai-nst the new farm laws, it is hard to miss three salon chairs, put up next to a banner reading ‘Crazy Beauty Salon’. The protesters can be seen waiting for their turn to get a haircut or shave done by three salon staffers brought by Sunny Vartiya, 26, a resident of Kurukshetra and the owner of the salon.

Mr. Vartiya, who reached the Singhu border with his workers on Wednesday morning, said he is here to stay. “These people are our brothers and we are because they are. Also, this is possibly the only sewa which has not been offered here yet. There’s plenty of everything else. People here are also in need of this service,” he said.

Mr. Vartiya said he has come with five of his employees and there are more on their way. When the three workers take rest, the others would work, he said, adding that they started the sewa at 9 a.m. and would continue till 9 p.m. This routine will be followed every day. “We have come equipped with our scissors, hair gels, creams and cleaning material. We offer most services which an open salon can offer — haircuts, hairstyles, beard trimming, shaving, facials etc.,” he said. People are mostly coming for beard trimming and haircuts. “I haven’t sat since morning,” said Mr. Vartiya while cutting the hair of a protester.

Rahul, one of the employees, said he doesn’t have a farming background but is here because he believes in the protesters’ cause. “They are asking for their rights and the government should listen to them,” he said.

A protester, who identified himself as Sukhdev Singh (23), a resident of Moga, said he was glad he could get his beard trimmed by the salon workers. “When we have to do it ourselves, we get lazy and postpone it till we go home. It’s [salon service] not a necessity here. But because this man is offering the service, we are getting it done,” he said.

Waiting for his turn, 18 year-old Jagdeep, another resident of Moga, said he was here to get his hair set. “I forgot my gel at home. I am happy they [salon workers] are here.”

Exhibition of cartoons relating to COVID-19