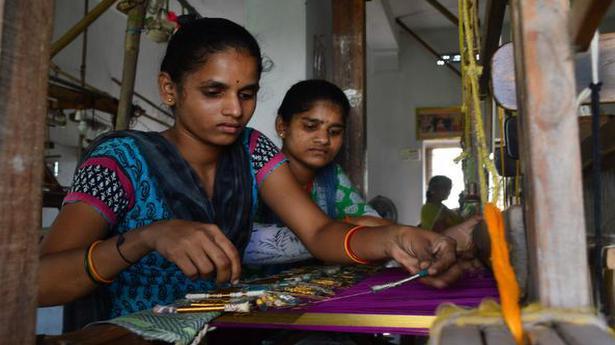 
It has been the sheer sweat and skill of the girls from the fishermen community in the villages of Uppada coast in East Godavari district for the past three and a half decades that makes the saris with jamdani technique very famous and the choice of many.

During the 17th century, the Uppada saris were woven by the local handloom weavers with jamdani technique with pure cotton, gold or silver zari, only to be worn by the royal families of Pithapuram, Bobbili, and Venkatagiri in Andhra Pradesh. The rulers even restricted the weavers from selling the saris to the common people.

In jamdani technique of handloom weaving, the motif appears same on front and reverse side of the sari and it is woven by hand.

In 1985, Weavers Service Centre (Vijayawada) revived the jamdani technique when it was on the brink of extinction. Later, the production of the jadmani saris began to gain momentum, with requirement of a great number of weavers mastered in the exquisite technique.

“More than 200 girls weaving the jamdani saris are from our community, which comprises above 80% of the total workforce, producing the famed jamdani saris in the industry. The highest monthly wages is ₹8,000 each for those with more than seven years of experience,” an 18-year-old V. Sireesha from the fishermen community, Uppada village, has told The Hindu.

At 11, she dropped out from school to be groomed in the jamdani technique and now gets ₹7,500 monthly wages. She weaves the saris ranging from the cost of ₹7,500 to above ₹1 lakh.

Fourteen-year-old Chodipilli Chinnari of the same community says: “At the age of 9 years, I joined the work and groomed by the master weavers. By January next, I will gain five years of experience. The girls in the age group of 8-20 years are generally preferred for the job as they work fast on the yarn.”

“We are being paid the fixed monthly wages irrespective of the sari cost or size of the motifs. Two girls are deployed for each loom. The maximum weaving duration is 45 days for weaving the sari of highest worth more than ₹ 1 lakh. The timings are from 6.30 a.m. to 6 p.m. However, one could leave the loom if the day work is done early,” says Ms. Sireesha. She attends the work along with her elder sister.

According to Vanka Korlamma, mother of 20-year-old Vanka Ratnam, from the same village, until a few years ago, the number of girls from our community engaged in the weaving was above 1,000. The number came down slowly as many quit the weaving to join the aqua processing plants that pay highest wages. “Our girls continue the work until they get married and quit soon after it. This has been the practice for over a few decades in our community,” says Ms. Korlamma.

The master weavers woo the poor from the fishermen community by offering an advance payment to their families, in return of promise that the girls in the age group of 8-20 are sent to the weaving work.

The girls engaged in the weaving work are from the villages in Uppada, Kothapalli, Aminabad, Mulapeta, Ravindrapuram, Komaragiri, Katukudumalli and Vakatippa, an area that was registered by the Geographical Indications Registry tag (GI Tag) for the jamdani technique in 2009.

Weather system in the Bay may turn into deep depression

‘Woman with U.K. travel history has no symptoms of new COVID strain’