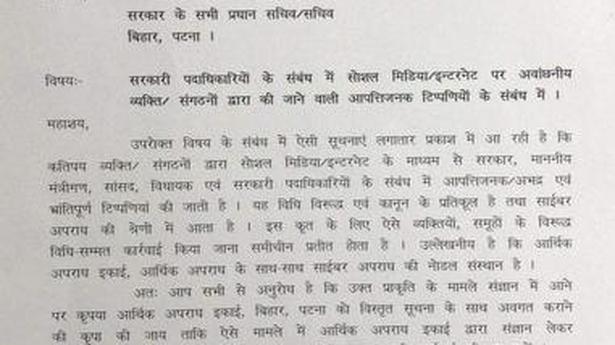 The Bihar government is set to take action under cyber crime law against individuals and organisations for “offensive comments” against the State government, Ministers, MPs, MLAs and government officials.

“It has regularly been coming to light that certain persons and organisations have been making offensive comments through social media and internet against government, honourable ministers, MPs, MLAs and government officials as well, which is against prescribed law and comes under cyber crime laws. For this act, it seems appropriate to take action against such organisations and individuals”, Nayyar Hasnain Khan, Inspector General of Police (IG), State Economic Offences Wing, which also handles cyber crimes, wrote a letter on January 21 to all Principal Secretaries and Secretaries of the State government departments.

“You all are requested to inform the Economic Offences Wing with details about any such acts so that suitable legal action could be taken against those organisations/individuals after investigation,” Mr. Khan added in his letter.

Meanwhile, the Opposition Rashtriya Janata Dal has called the government move arbitrary and a sign of nervousness.

“This government has become intolerant towards criticism by the media and other people. It’s an arbitrary move and a sign of nervousness, and we’ll oppose such a move by the government,” said RJD leader and party spokesperson Mrityunjay Tiwari.