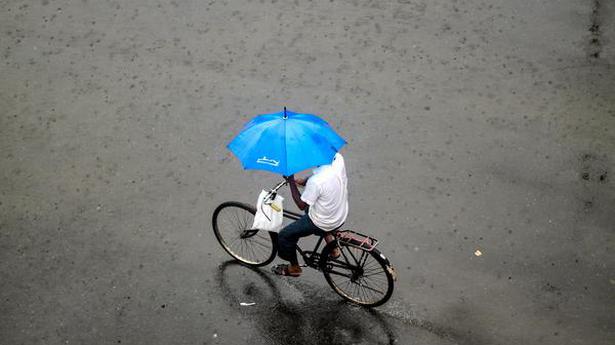 Situation in Chiplun in Ratnagiri district especially dire; feared to be worse than the 2005 floods

Relentless showers over the last 24 hours pounded several parts of Maharashtra, particularly Chiplun and Mahad in the Konkan region and Kolhapur and Satara districts in the ‘sugar heartland’ of western Maharashtra, leading to a flood-like situation in several places in these parts on Thursday.

According to reports, one person is believed to have died in a rain-related accident in Mahad city in Raigad, while the situation in Chiplun and Khed taluks (both in Ratnagiri district) is particularly dire, with more than 5,000 residents already moved to safer zones on high ground while efforts are under way on a war footing to rescue many more feared trapped inside their houses.

According to sources, the Vashishti and Shiv rivers which course through Chiplun city began overflowing a little after 3.30 a.m. on Thursday with the discharge of waters from a nearby dam, taking residents by surprise as the snaking floodwaters began rising to alarming levels.

Residents fear the present situation in Chiplun to be far worse than that experienced at the time of the 2005 floods which ravaged the Konkan. The old market area and the new bridge which straddles Chiplun city have been completely submerged by floodwaters. Due to continuous overnight rains, headwaters from dams passing through the Kumbharli Ghat — a mountain pass connecting coastal Ratnagiri with Satara district — have flooded Chiplun city.

Scores of four-wheelers and two-wheelers were seen floating in the water, while several houses are said to have been damaged owing to the rain.

Remarking that the situation was extremely dire in the Konkan region, Sena MP Vinayak Raut, who represents the Ratnagiri-Sindhudurg Lok Sabha constituency, said that water levels had risen eight-ten feet in the city while the old part of Chiplun was completely submerged under the floodwaters.

“Ratnagiri has been bearing the brunt of heavy rainfall that has been lashing the Konkan while the condition of Chiplun and Khed tehsil is especially bad. People are trapped in houses. Townships and bazaars have been inundated by floodwaters. I have urged Chief Minister Uddhav Thackeray to immediately dispatch rescue teams and take help from the Coast Guard. Two National Disaster Response Force [NDRF] teams have already started from Pune while a State Disaster Response Force [SDRF] team had been dispatched from Kolhapur,” Mr. Raut said, adding that helicopters, too, would be mobilised to aid in rescue efforts.

With a lethal combination of high tide and heavy rains derailing rescue efforts in the mountainous locales from the outside, authorities expressed fears of the NDRF team would face a daunting challenge in reaching Chiplun. Municipal authorities have pressed all available boats into action.

Sena leader Anil Parab, the Guardian Minister of Ratnagiri, said that the first priority would be to rescue the people in the low-lying areas along the coast while Relief and Rehabilitation Minister Vijay Wadettiwar said that rescue operations had commenced in earnest.

The grim scenes in Chiplun, Khed and Mahad are already conjuring up harrowing memories of the 2019 floods which had ravaged Kolhapur and Sangli districts.

“Chiplun is like a saucer with mountains on four sides and the Vashishti River coursing through the city. The present condition is expected to be worse than the floods of 2005 and 2007 and the NDRF may face a daunting challenge to reach Chiplun. We are praying that all those trapped emerge unscathed from this ordeal,” said Bhaskar Jadhav, the Sena MLA from Guhagar constituency in Ratnagiri.

Torrential rains have forced the Mumbai-Goa highway to remain completely closed while landslips and rockfalls have resulted in rail traffic on the Konkan Railway coming to a standstill. The Ghat areas in Pune district have especially witnessed a number of rockfalls with rail traffic completely disrupted along the Mumbai-Pune railway line following a rockfall at Karjat near Lonavla.

Authorities said that a flood-like situation currently faced Mahad tehsil where the water had reached waist-levels. Mahad has received 207 mm rainfall in the last 24 hours. The floodwaters entered shops, bazaars, residential areas while communication was disrupted with several villages.

BJP Leader of the Opposition in the Legislative Council Pravin Darekar criticised the ruling Uddhav Thackeray-led Maha Vikas Aghadi government for failing to anticipate the magnitude of the monsoon disaster that befell the Konkan.

“An NDRF team ought to be permanently stationed in Konkan. It is a given that the region experiences extremely heavy rain. Why is it that the government machinery is awakening to the dangers only now when thousands of people are battling for their lives in flood-hit places like Chiplun” Mr. Darekar said.

Meanwhile, two more NDRF teams from Pune are heading to Kolhapur district where several tehsils have been pummelled by downpour in the last 48 hours.

While Gaganbawda and Chandgadh are among the worst-hit tehsils in Kolhapur, the district’s Panchganga river is currently flowing at 36 ft near the Rajaram bridge (the danger mark is 43 ft) while nearly 40 barrages and waterworks are submerged under the rainwaters.

Neighbouring Satara was not spared from monsoon fury either, with the hill station of Mahabaleshwar notching a record 458 mm rain in the last 24 hours, prompting a massive discharge of water from the Koyna dam. The district has been put on high alert.

The Pune branch of the India Meteorological Department has predicted widespread rainfall in the State till July 25, which is expected to cover almost 75% of the total area.