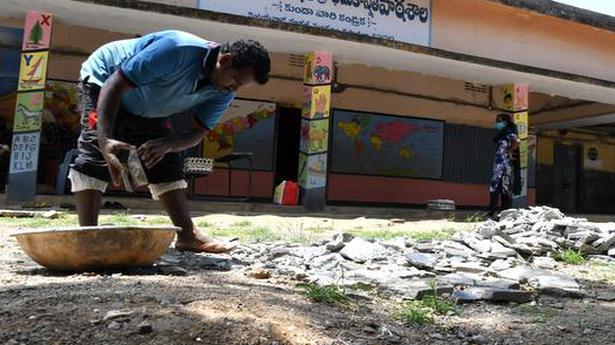 
The Andhra Pradesh School Education Regulatory and Monitoring Commission (APSERMC) has decided to serve notices to about 75 private schools and junior colleges in the State, which were running without proper facilities.

“Many schools and colleges are running without following COVID-19 protocol posing a threat to students and staff. There were no caution boards and sanitisers while sanitation was poor on the premises,” said Mr. Eswaraiah.

Despite several reminders, the schools were reopened without sanitisation, proper toilets and drinking water. Classrooms, mess and hostels were not clean, Mr. Eswaraiah observed, and said that the APSERMC would recommend to the School Education department and the Board of Intermediate Education (BIE) for cancellation of recognition to such institutions.

“In some institutions, it was found that more than 100 students were crammed in classrooms. In hostels, eight students were accommodated in each room,” said V. Narayana Reddy, another member of the commission.

“A few months ago, we served notices to about 45 institutions and the recognition of those schools and colleges would be cancelled by following the due procedure. Action would be initiated on more educational institutions, which are functioning in violation of the government norms,” said C.A.V. Prasad, who inspected a few colleges in Krishna, Visakhapatnam and Srikakulam districts.

“We also verified the qualifications of some faculty and other staff, and found some irregularities. Some schools and colleges are collecting a hefty fee, including COVID-19 fund and are not providing any safety and security for students,” Narayana Reddy said. Ernakulam gets a waste collection calendar