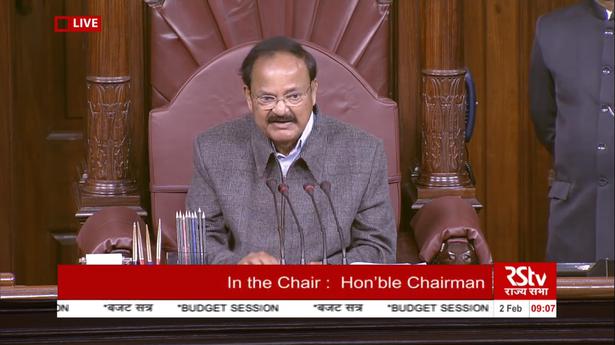 
A day after the presentation of Union Budget, Rajya Sabha has convened the first functional session since the Budget session commenced on January 29.

The Opposition parties have moved a motion for discussion on farmers’ protests in today’s session. They were unplacated by Chairman Venkaiah Naidu’s explanation that the discussion will be held tomorrow. The Opposition members raised slogans inside the Upper House, demanding a repeal of the three farm laws which were cleared in Monsoon Session of Parliament amidst acrimonious scenes.

The Upper House reconvenes with Deputy Chairman Harivansh in chair, but the Opposition members continue protests.

Parliamentary Affairs Minister Prasad Joshi tells the House that if members do not want Question Hour, they should place that opinion on record.

“They demanded Question Hour, so the govt. ensured that Question Hour is restored. Let them place it on record that they don’t want Question Hour. They didn’t participate in Zero Hour too. This is highly unfair,” he says.

Question Hour commences, as Opposition members raise slogans in the well of the House.

“Let it be noted by one and all that no slogans will go on record,” says Mr. Naidu.

“Please recall that last time [monsoon session] because of the pandemic we didn’t have Question Hour and Zero Hour. Now we have it,” says Mr. Naidu, adding that Question Hour should not become a casualty.

“This House could not discuss the farmers’ issue when it came in the House in Monsoon Session. Now we are not aware of what are the discussions taking place between the govt and farmers,” says Sukendu Shekhar Roy of TMC.

“Hundreds of farmers are sitting in bitter cold. We need to discuss their issue,” says DMK’s Tiruchi Siva.

“Parliament is a house of representatives, it can not ignore the plight of those sitting on the road,” says RJD’s Manoj K. Jha.

“Those who feed us are sitting on the road. We can not ignore them,” says CPI’s Binoy Viswam.

Several Opposition parties, including the Congress, the DMK, the TMC and CPI (M), moves adjournment notices in the Rajya Sabha to suspend the business of the day to debate the three farm laws.

Chairman Naidu says that the issue is important, but the convention has been that such discussions are initiated by Lok Sabha and carried over to Rajya Sabha. He says that time will be set aside for these discussions on Wednesday, amidst protests from members.

“I understand the concern of the members. As the Chairman of the House, I can not speak on the positions taken by the farmers. Neither this side nor that is opposed to a discussion on farmers. It has to be held at the earliest. The discussion on Motion of Thanks to the President’s speech is scheduled for tomorrow (February 3). Members can avail this opportunity and express their view points. I am not able to accept the notice given to suspend business to discuss the farm laws,” says Mr. Naidu.

The following ministers lay papers on the table:

– Yesso Naik For Ministry Of Ayush

– Ashwini Kumar Choubey For Ministry Of Health And Family Welfare

The Chairman, Rajya Sabha, reminded members to respect the seating arrangements made keeping in mind the coronavirus pandemic. He referred to members sitting in Rajya Sabha and Lok Sabha chamber, including the visitors gallery, without permission.

“Staggered seating arrangement has been made after detailed discussions with Lok Sabha Speaker and the floor leaders, so please sit in your designated seats,” he said.

“Last time unfortunate incidents happened I don’t want to recall them… members should participate in debate in a dignified manner,” said Mr. Naidu.

The Chairman also congratulated the Indian cricket team for their victory against Australia in the Test Series.  “It was a great team effort. I place my record our deep appreciation for the youngsters and the team management,” he said.

Bills for Consideration and Passing 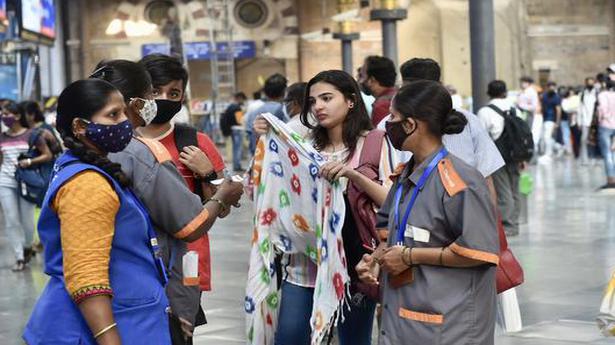 Over 1,300 buildings sealed in Mumbai: BMC