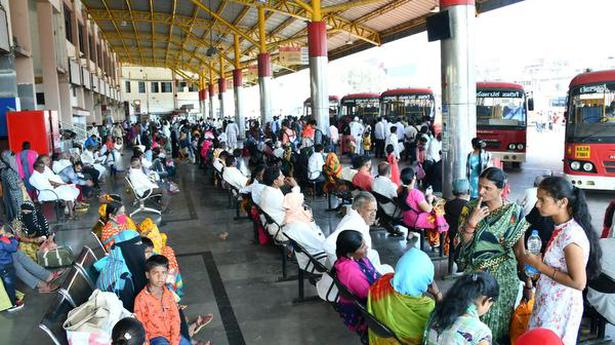 
The sudden strike by employees working in North Eastern Road Transport Corporation (NEKRTC), a State-owned undertaking primarily operating in Kalyana Karnataka region, left passengers stranded across the region on Friday. Passengers waiting for their buses in stands across towns and cities in the region was a common scene to be seen.

As per information provided by the NEKRTC authorities in Kalaburagi, the bus services at 839 of the 2,247 routes in Bidar, Kalaburagi, Vijayapura, Yadgir, Raichur, Koppal, and Ballari were cancelled owing to the strike.

At certain places like Kalaburagi, passengers resorted to spontaneous protest condemning the transport staff for causing inconvenience to the people who, being unaware of the strike, came to bus stands.

In Ballari also, passengers were found arguing with the protesting transport staff.

“If the people were notified about the scheduled strike well in advance, the people would have planned their journey accordingly. Those who were on urgent and unavoidable tasks would have arranged private vehicles. This kind of surprised and sudden strike by the employees is unacceptable,” a passenger in Ballari said.

At other places, transport staff including conductors, drivers and mechanics staged demonstrations demanding that the government consider them as State government employees and clear the salary dues. “We have been working hard to offer smooth and safe transport services to the people. But, we are facing so many problems and nobody is listening to our woes. The government should consider all the employees working in the four transport corporations – KSRTC, NEKRTC, NWKRTC and BMTC – as the employees of the government and extend all the benefits to them,” an employee who participated in the strike in Ballari said.

The Kalaburagi Central Bus Stand was full of waiting passengers. The higher authorities were found repeatedly appealing, using loudspeakers, to the agitating bus conductors and drivers to end the strike and resume work to avoid inconvenience to the passengers. However, the protesting staff did not heed. Taking undue advantage of the absence of bus services, autorickshaw operators and taxi drivers in Raichur were found to be exploiting commuters by overcharging.

“The bus charge for Kallur which is 25 km away from Raichur is ₹27. But the private transport operators are demanding ₹400,” a passenger said.

The bus services in Bidar and Yadgir remained largely unaffected.