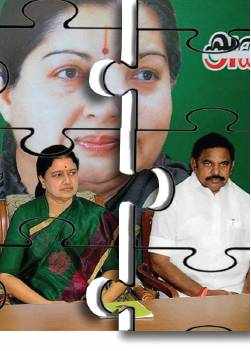 
Returning to Chennai last Tuesday after serving a four-year sentence in the disproportionate wealth case, V K Sasikala went into a week’s ‘isolation’. That ends tomorrow. Now, will there be fireworks between the AMMK and the AIADMK or will there be feelers for a patch-up?

Sasikala’s nephew and AMMK leader T T V Dhinakaran has said Sasikala will be back at the helm of the AIADMK. Chief minister Edappadi K Palaniswami has said, without naming Sasikala, there is no place for conspirators in the party. Fisheries minister D Jayakumar has ruled out the possibility of EPS meeting Sasikala, while her supporters have said the same leaders will soon fall at her feet. Looking at the crossfire, it is easy to presume that the twain shall not meet, but then politics is the art of the possible.

The possibilities of an AIADMK-AMMK collaboration, if not a merger, is a classic case for a study on challenges and opportunities in contemporary Indian politics. First, the challenges. The wounds left behind by the 2017 split are still festering because of the bitterness on both sides, mostly infused by uncharitable statements. In the normal world, a word is like an arrow: Once delivered, it cannot be taken back; but in realpolitik, the practitioners eat their words like popcorn or deliver another arrow to neutralise the earlier one. So, all those verbal duels would mean nothing the moment the rivals decide to grin, bear and hug.

The bigger challenge is the core reason for the split: Control. After J Jayalalithaa’s death on December 5, 2016, first O Panneerselvam and later EPS were chosen by Sasikala to be the chief ministers. They had, before falling out with Sasikala, been subservient to her. Once in power, and without her leash, they woke up to a brave new world. The split and the resultant weakening of the party was never too big a price for the duo to pay once they tasted that freedom at the top. This unbridled sense of elevation was so much more for EPS, to whom OPS was forced to play second fiddle. The biggest impediment to a reunion of the two groups will be EPS’s fear of being controlled and Sasikala’s urge to control.

Here OPS makes a curious case. Since he cannot be the boss on either side, will he consider opening channels of communication with Sasikala? The gounder lobby gaining bigger control within the AIADMK and AMMK trying to emerge as the thevar counter, OPS may have reasons to consider this. Likely that he already has.

This, however, is going to be another tricky exercise for two reasons: One, Sasikala, who promoted OPS in better days, wouldn’t trust him again for his ‘dharmayudh’. Two, TTV wouldn’t want OPS between him and his aunt. But OPS may have his utility for the AMMK if he crosses over; he would serve as a go-between for an uneasy friendship with the AIADMK.

This probability may sound less preposterous to those who have read the subtext of the AIADMK-AMMK wrangle. During her marathon roadshow from Bengaluru to Chennai last Monday-Tuesday Sasikala, even while warning her detractors of her imminent return, had cautioned them against “the common enemy” taking advantage of the situation to attain power. A day later, addressing a party gathering, EPS’s right-hand man S P Velumani said, without referring to Sasikala or the AMMK: “A family will have problems. Tomorrow, if our enemy causes a problem, we will come together. Our enemy is the DMK.”

It’s jobs, stupid: Bihar’s politics is moving away from identity to fulfilment of aspirations

The rise of radical Sikhism in Europe and Canada

2020: Year of the big state: State power ruled supreme this year at the cost of individual freedoms