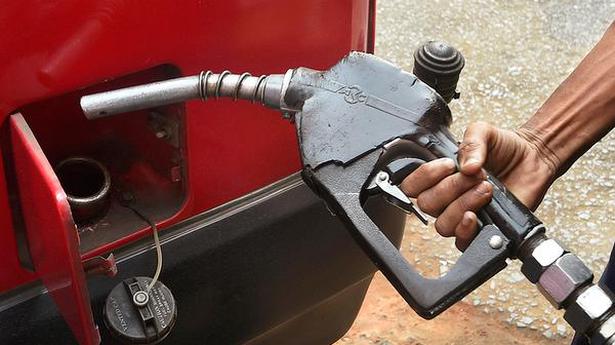 
After a continuous increase in the fuel rates for the last several days, the price of petrol on Wednesday crossed the ₹100 per litre mark in Rajasthan’s Sriganganagar district.

The petrol and diesel prices in Sriganganagar soared to ₹100.13 and ₹92.13, respectively. In Anuppur of Madhya Pradesh, petrol is priced at 99.90 per litre and diesel at ₹90.35.

Rajasthan has one of the highest value added tax (VAT) rates on fuel among the big States in the country, despite the State government having reduced VAT on both petrol and diesel by 2% last month.

The petrol rates touched the record high apparently because of transportation cost, as the fuel is supplied to Sriganganagar, situated in northern Rajasthan, from Jodhpur and Jaipur depots.

Chief Minister Ashok Gehlot had earlier this week blamed the Centre for the rising fuel prices, while pointing out that the State government would lose annual tax revenue of ₹1,000 crore by reducing VAT on fuels by 2%. He said in the State Assembly that the Centre had increased special excise duty in which the States did not have a share.

Rajasthan Petroleum Dealers’ Association president Sunit Bagai said the State government had increased VAT on petrol and diesel by 6% each during the COVID-19 lockdown.

The VAT, which was still high, should be brought down, as the high fuel prices would make the movement of goods costlier and increase the hardships of common people, he said.