‘Increased investment in development of basic infrastructure one of the factors’

A combination of factors, including increased investment in development of basic infrastructure, had resulted in the frequent increase in fuel prices in the country, Minister of Petroleum and Natural Gas and Steel Dharmendra Pradhantold mediapersons here on Saturday.

The road and rail sectors got the highest ever allocation in the recent Union Budget. There was a 34% increase in allocation for infrastructure projects. The tax collected from the sale of fuel is among the sources garnering revenue for that. Another priority area is welfare projects. Around 80% of India’s fuel is imported and oil-producing countries are demanding a higher price, since their economies are not in good shape. However, oil-producing countries had announced future pricing mechanisms where they had given some relief to Asian countries like India, he added.

On why the government had invested ₹6,000 crore in a petrochemicals complex at the Kochi Refinery (which will be inaugurated by Prime Minister Narendra Modi on Sunday), even as BPCL’s disinvestment process was on, Mr. Pradhan said the project would help the process of India becoming self-sufficient, for instance, in the manufacture of paints, where ₹4,000 crore worth of items were imported every year.

The private sector had much to offer, he said, citing the example of the Cochin International Airport, the first airport in the country to be built on public-private partnership model. “Air travellers are thus getting good quality service from the airport, at affordable cost.”

On Hibi Eden, MP, approaching the Lok Sabha Speaker citing breach of privilege and protocol violation over him being omitted from the dais when the Prime Minister would launch four projects in Kochi on Sunday, the Minister said he had written to Mr. Eden. The MP had said that people’s representatives from the Congress were “deliberately omitted from the dais as part of a conspiracy” and that it showed that the BJP was “hand in glove” with the CPI(M).

Ports, Shipping and Waterways Minister Mansukh Mandaviya said the two container roll-on roll-off (ro-ro) vessels of the Inland Waterways Authority of India (IWAI), that Mr. Modi would launch in Kochi on Sunday, would play a role in taking container lorries off city roads by helping ferry containers through the backwaters and National Waterway III. Coastal shipping promoted by the Centre was also important in decongesting roads, he added.

The vessels cost ₹12.50 crore each and were built at the Cochin Shipyard. The IWAI has handed them over to Kerala Shipping and Inland Navigation Corporation (KSINC) for operation. Each of the vessels, m.v. Adi Shankara and m.v. C.V. Raman, has a capacity to carry six 20-ft trucks, three 20-ft trailer trucks, three 40-ft trailer trucks and 30 passengers.

Mr. Modi will also inaugurate Sagarika, an international cruise terminal, at the Kochi port on Sunday.

Union Minister of State for External Affairs V. Muraleedharan and Cochin Port Trust Chairperson M. Beena were among those present at the press meet. 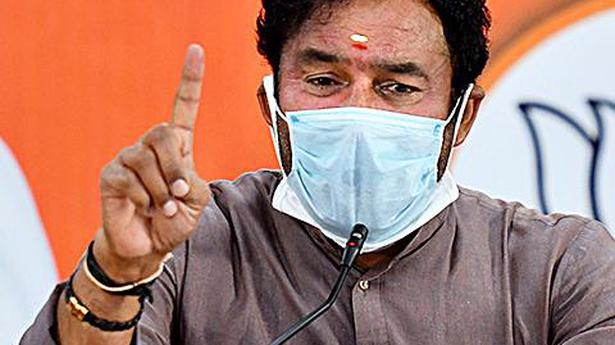