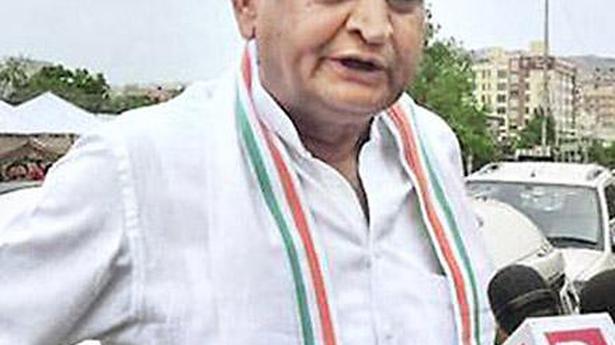 
Facing charges of not waiving the debts of all farmers despite its poll-time promise, the Congress government in Rajasthan has revised the plan for agricultural loan disbursement this year. The modified plan will make the money available to the cultivators at the time of sowing of kharif crops.

Cooperative Minister Udai Lal Anjana said in the State Assembly that the farm loans would be disbursed from July 15 to facilitate the agricultural activities. The disbursement before July-end would also be helpful in the timely implementation of the crop insurance scheme, he said.

The loan disbursement was earlier carried out twice every year in the State, first in mid-August and later on December 31. The central cooperative banks have been sanctioning and distributing loans from September 1 to March 1 for rabi crops and from April 1 to August 31 for kharif crops.

Mr. Anjana said a delay was observed in the registrations for crop insurance scheme this year for the current cycle, into which a team headed by the Cooperative Department’s Additional Registrar would conduct a probe. Reports of some irregularities had been received in particular from Jhalawar district, he said.

The State government had launched online registration and disbursement of farm loans from the kharif crop cycle in 2019, which caused a partial delay that year. The loan disbursement for 2020-21 has started from the beginning of the financial year.

More than 20 lakh farmers have received loan waiver for the money which they had borrowed from the cooperative banks, but the waiver of loans obtained from nationalised and commercial banks has not been done. The ruling Congress has maintained that it was in the Centre’s hand to get one-time settlement for the waiver of loans of nationalised banks.