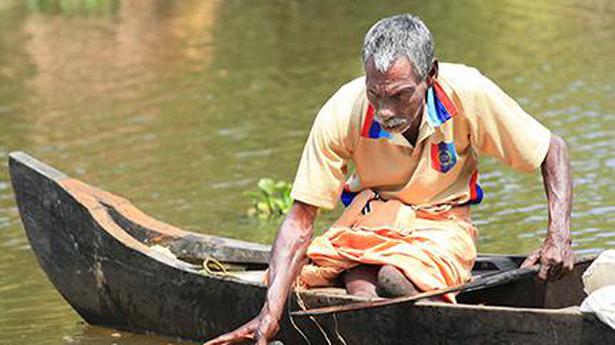 
The untiring efforts of a 69-year-old man, paralysed below his knees, towards cleaning up Vembanad Lake, have earned recognition from the highest office of the country.

In this month’s edition of Mann Ki Baat, a radio programme, Prime Minister Narendra Modi on Sunday hailed the commitment of N.S. Rajappan, a differently abled man from Kaippuzhamuttu, near Kumarakom, Kottayam. For several years, Mr. Rajappan has been earning a living by collecting plastic bottles floating on the lake and the streams linked to it.

During the speech, Mr. Modi spoke about an elderly person, “who makes us realise our responsibilities. In Kottayam of Kerala, there is an elderly ‘divyang,’ N.S. Rajappan Sahab. He cannot walk due to paralysis, but this has not affected his commitment to cleanliness,” the Prime Minister said.

“Taking inspiration from Rajappan ji, we too should, wherever possible, contribute to cleanliness,” he added.

In response, Mr. Rajappan said he was so happy that the Prime Minister had acknowledged his efforts. Mr. Rajappan was afflicted with polio at the age of five and has been paralysed since. But he would venture out to the waterbodies in and around Kumarakom on a small country boat to collect plastic every day, early in the morning.

He mainly collects plastic bottles dumped in the water. The plastic thus collected is cleaned and dried before being sold to a local agency at ₹12 a kilogram.

Living alone in a partially damaged hut on a riverbank in Arpookkara panchayat, Mr. Rajappan is dependent on his sister’s family for food. Mr. Rajappan shot to fame after a local YouTuber published a small video on his life, which later went viral on social media.

On January 14 this year, United Nations Environment Programme (UNEP) chief Erik Solheim too had shared a brief video on Mr. Rajappan on social media, along with a request that ‘we should make him famous’.