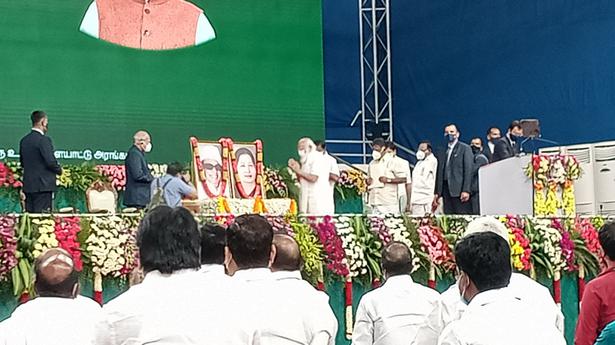 “Tomorrow, 14th February, will be in Chennai (Tamil Nadu) and Kochi (Kerala). Numerous development works would be launched that would add speed to fulfilling the vision of Aatmanirbhar Bharat. The projects will boost ‘Ease of Living’ for our citizens,” Mr. Modi tweeted in English, Malayalam and Tamil from his official handle.

The Prime Minister arrived in Chennai at around 10.30 a.m. After his program in Chennai, he will reach Kochi to lay the foundation stone and dedicate various projects to the nation at around 3.30 p.m. He will be accompanied by the respective Chief Ministers and Governors, and the Union Minister for Petroleum and Natural Gas in Kochi.

Deputy Chief Minister of Tamil Nadu O. Panneerselvam welcomes PM Modi to Tamil Nadu, and thanks him for the interest he has taken in the development of the State. He praises the Prime Minister’s work ethic and cites his speech in Rajya Sabha during this year’s Budget Session to appreciate his “emotional side”.

He said that the projects PM Modi will inaugurate will help in the development of the State.

Prime Minister Narendra Modi arrives in Jawaharlal Nehru Indoor Stadium in Chennai to unveil several key projects for the State. He is welcomed with traditional nadaswaram music. The crowd, following social distancing in the wake of COVID-19 pandemic, welcomed the PM enthusiastically.

As PM Modi’s event nears, police is ensuring that no one is wearing balck inside the inauguration venue or in the route of PM’s vehicle.

Earlier in April 2018, when the Prime Minister visited Chennai, he was welcomed by hundreds of black balloons with the words ‘Modi Go Back’ printed on them. Black flags were hoisted at the houses of opposition leaders and thousands of cadre as well.

Prime Minister Narendra Modi’s aircraft has arrived in Chennai as per schedule.

Prime Minister Narendra Modi is set to officially hand over the indigenous Main Battle Tank (MBT) Arjun Mk-1A to the Army in Chennai on February 14.
| Photo Credit: JOTHI RAMALINGAM B

Mr. Modi will hand over to the Army the state-of-the-art the Arjun tank, which has been indigenously designed and developed, and manufactured by the Combat Vehicles Research and Development Establishment, DRDO along with 15 academic institutions, eight labs and several MSMEs, it noted.

He will also inaugurate the Chennai Metro Rail Phase-I extension, completed at a cost of ₹3,770 crore, and commission passenger services from Washermenpet to Wimco Nagar. – PTI

Security agencies have installed anti-drone jammers at vantage points as part of an elaborate security arrangement for Prime Minister Narendra Modi who will be visiting Chennai on Sunday to launch various projects. The Prime Minister is scheduled to stay for about three hours in the city before proceeding to Kochi.

Security stepped up in Chennai ahead of PM’s visit

The police are making elaborate security arrangements ahead of Prime Minister Narendra Modi’s visit to the city to take part in a public programme on Sunday.

Workers affiliated to five unions will boycott the inauguration of the Propylene Derivatives Petrochemicals Project at Bharat Petroleum Corporation Ltd. (BPCL) by Prime Minister Narendra Modi here on Sunday in protest against the disinvestment of the public-sector company.

The unions said in a release here on Friday that the inauguration of the project despite the start of production in the plants is aimed at cashing in on the Assembly election due in the State. The workers affiliated to Cochin Refineries Workers’ Association (CITU); Cochin Refineries Employees Association (INTUC); Refinery Employees Union (KR); Kochi Refinery General Construction Workers Union (CITU); and Kochi Refinery General Construction Workers Congress (INTUC) will boycott the programme.

The unions alleged that the Prime Minister was adopting double standards by dedicating a project to the nation while going ahead with its disinvestment process. The Union Budget had reiterated that the sale would be complete in the 2021-22 financial year, it said. Row over denial of certification to Malayalam film