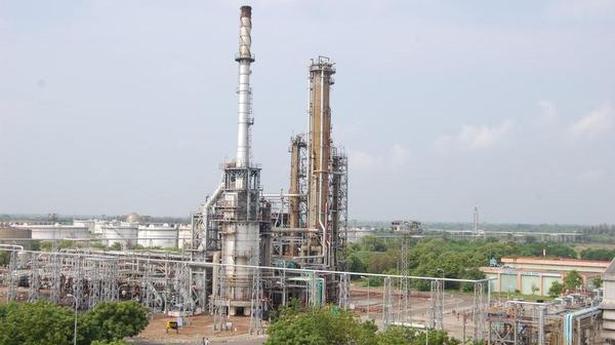 The refinery, which is coming up in place of an existing facility, will produce petrol and diesel meeting BS-VI specifications and polypropylene as a value-added product

Prime Minister Narendra Modi will lay the foundation stone for the Cauvery Basin Refinery at Nagapattinam on Wednesday evening through video-conferencing from New Delhi.

Tamil Nadu Governor Banwarilal Purohit, Chief Minister Edappadi K. Palaniswami and Union Minister for Petroleum and Natural Gas and Steel Dharmendra Pradhan would be present at the event to be held at Chennai Trade Centre from 4.30 p.m. onwards.

The refinery, with nine million metric tonnes per annum (MMTPA) capacity is being set up at Nagapattinam as part of a joint venture between Indian Oil Corporation Ltd (IOCL) and Chennai Petroleum Corporation Ltd at an estimated cost of ₹31,500 crore.

The refinery, which is coming up in place of an existing facility, would produce petrol and diesel meeting BS-VI specifications and polypropylene as a value-added product. Around 80% of materials and services for the refinery would be sourced indigenously, said Rajeev Ailawadi, Managing Director (incharge), CPCL, who addressed a press conference here on Monday.

Mr. Modi will also dedicate to the nation CPCL’s gasoline desulfurisation unit at Manali that has been constructed at a cost of ₹500 crore. The unit would produce low sulphur (less than 8 ppm) environment-friendly gasoline.

The Prime Minister will also dedicate to the nation, IOCL’s 143 km long Ramanathapuram-Thoothukudi section of the Ennore-Tiruvallur-Bengaluru-Puducherry-Nagapattinam-Madurai-Tuticorin Natural Gas pipeline (ETBPNMTPL) that has been laid at the cost of around ₹700 crore.

On a question about the need for expanding the refinery, P. Jayadevan, Executive director, IOCL, said that demand for oil was increasing and oil demand was expected to peak in India by 2040-45. At that time electric vehicles are expected to be 30% of the vehicle population. “If need be, the refinery can switch over to chemical from fuel,” he said. Opposition’s role is not to remain silent, says Stalin

Efforts on to find 35 labourers trapped in Uttarakhand tunnel