The mystery surrounding the discovery of a woman’s body that had been set on fire by the roadside near Kellur village in Periyapatna near here early on November 8 has been cracked by the Mysuru district police, who have arrested the woman’s boyfriend and his associate on charges of murdering her.

Soon after early morning walkers drew the attention of the police to the body, the police rushed to the spot and started an investigation. “The upper part of the body had already been charred. The lower part of the body was still burning”, said Superintendent of Mysuru District Police C.B. Ryshyant, who had also visited the spot to gather evidence.

When the team of police personnel were investigating the case, they came across a missing complaint from nearby Hulahalli village in Nanjangud taluk registered on November 14. When the missing woman’s age and height matched the appearance of the burnt body, the police took a photograph of the anklet recovered from the body and sent it to complainant.

After the complainant Mahadev Shetty and his wife confirmed that the anklet belonged to their missing daughter Bhagya, aged about 24 years, the police soon rounded up Siddaraju, 24, who was in a relationship with Bhagya, a BCom graduate, working as a typist in the office of a lawyer in Hulahalli.

During interrogation, Siddaraju, who was in a relationship with Bhagya for the last four years ever since they met at a wedding in 2016, said Bhagya was forcing him to marry her though he had made it clear to her several times that he was not interested. But, fed up with the constant pressure she was mounting, Siddaraju, an employee in a private firm in Nanjangud, hatched a plan with his friend Prasanna, a taxi driver, to kill her, Mr. Ryshyant said.

Siddaraju asked Bhagya to join him and Prasanna on a trip on November 7 to Dharmasthala, where he said they would get married and later settle down in Bengaluru. A convinced Bhagya left Hulahalli around 3.30 p.m. on November 7 and reached Mysuru, where she swas joined by Siddaraju.

Both of them watched a movie in a multiplex in Mysuru till Prasanna arrived in the evening after dropping a passenger. All the three boarded the car and proceeded towards Dharmasthala. En route they stopped the car around midnight when both Siddaraju and Prasanna allegedly strangled Bhagya, who was sitting in the rear seat, with her veil, said Mr. Ryshyant.

The duo later dumped the body by the roadside and set it on fire along with the documents that Bhagya had brought with her. The accused had allegedly kept ready petrol in a can for burning the body. After setting fire to the body, Siddaraju and Prasanna continued their journey towards Dharmasthala and returned to Mysuru on November 8 evening, the Superintendent of Police said.

Though Mr. Ryshyant clarified that there was no sexual assault on Bhagya before the murder, he said that Siddaraju, during interrogation, had confessed that they had consensual sex several months ago. 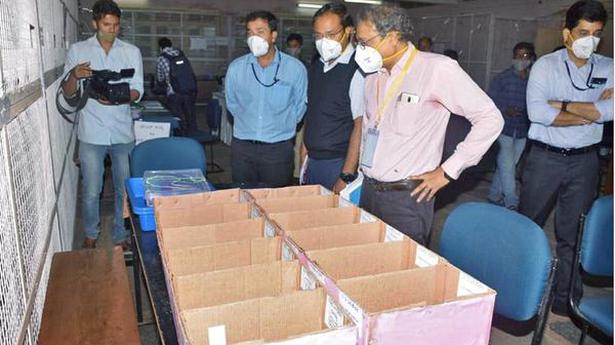