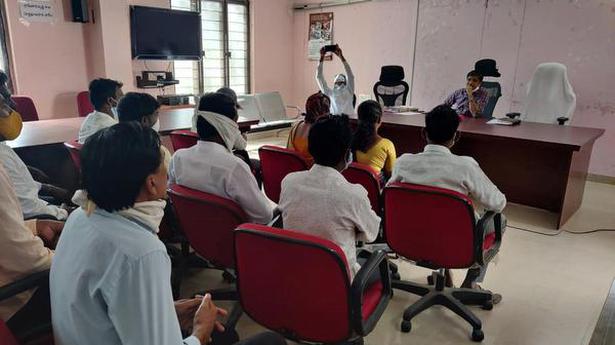 
S. Ashok is a resident of Etigaddakishtapur in Toguta mandal. He, along with others, has stopped works of Mallannasagar adjacent to the village last week stating that they were facing several problems including heavy sounds and dust. They demanded that they be paid compensation immediately and the houses being constructed at Mutrajpally be given to them. They stated that they were ready to vacate the village if their demands were met.

In the past police used to threaten them with dire consequences and several times used force to disperse them. Instead, this time the police spoke with the agitators in soft language, requested them not to stop the work with a promise to take them to the officials including Collector.

As promised, the police of Toguta took active initiative and arranged a meting with Revenue Divisional Officer (RDO) Siddipet at his office. The oustees village met the RDO and poured their problems to the official stating that they were ready to vacate the village provided all the compensations due for them including structure values were paid at one go. The RDO promised to take these issues to the notice of the Collector.

Oustees informed the police of the same, and the police spoke to Collector P. Venkatarami Reddy, took his appointment and arranged a meeting with him at Mulugu Forest Guest House.

“Many of us did not get compensation even today. Structure values of several oustees are pending. There are several aged persons who were yet to receive a package, while only few people received it so far. Similarly, allot us houses with pattas and we are ready to move into new houses. Compensations were paid only part of Sada Bainama lands and what will happen for the remaining lands as the land lost its nature?” the oustees asked the Collector.

The villagers said the District Collector had promised to send Revenue Divisional Officer and other officials to the village next week and collect the details of issues being raised by each family and address them.

“There was a change in the attitude of police and officials. They are behaving with the kind of softness which was not witnessed in the past. We feel this was the impact of Dubbak by-election and Greater Hyderabad Municipal Corporation (GHMC) election results,” said a villager.