The Srikakulam police department is taking up road repairs on a war footing to prevent accidents at many ‘black zones’ in the district.

The department is taking the help of National Highway Authority of India, Roads and Buildings and Panchayat Raj Department in mobilising material and men while encouraging youth and locals to participate in the repairs. Srikakulam Superintendent of Police Amit Bardar said that the defects in road engineering and damage to many stretches due to recent rains were leading to many fatal accidents both on the national highway and State highways.

Srikakulam has a 170-km stretch of NH-16 where accidents are rising in frequency. It is observed that at least 200 accidents are taking place per month on various roads. According to officials, a higher number of accidents are occurring at junctions which connect both NH-16 and State highways and Panchayat Raj roads. The accidents have reduced with the laying of speedbreakers at Mogilipadu and Kosangipuram junction under Kasibugga police station limits. Potholes were covered between Raktakanna village and Itchapuram town. Roads and culverts which were damaged at Kottaguda village of Bhamini mandal were also repaired with the initiative of the Battili police.

“Many two-wheeler riders are getting involved in road accidents due to damaged roads although they observe traffic rules. We decided not to leave anything to chance. Fortunately, we got a good response from concerned government departments as well as from the public in many areas. We roped in youngsters for the repair works since they need to know more about road safety norms. They are also taught to wear seat belts and helmets compulsorily while driving cars and bikes. Some of them actively participated in flash mob programmes to create awareness among people about road safety,” said Mr. Bardar while speaking to The Hindu.

According to him, the department is taking inputs from all station house officers in the district to prevent road accidents in all roads including the tribal belt. The department has observed that many people are opting for personal vehicles for long distances to avoid COVID-19 infection by travelling in buses and other public transport facilities. 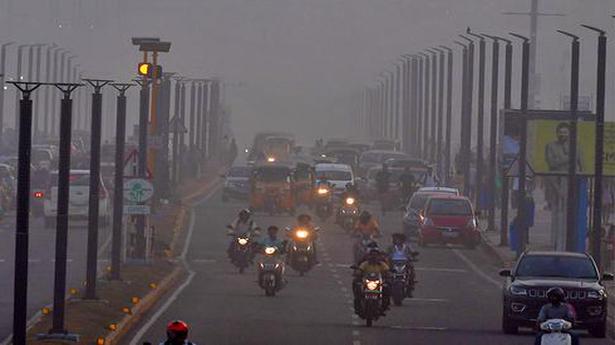