Political parties have urged the Election Commission of India to hold same-day Assembly elections in Tamil Nadu, Kerala and Puducherry while also flagging concerns over unilateral appointment of nominated legislators by the Centre, bogus voters and distribution of freebies that could mar free and fair elections.

Representatives of the parties, who handed over memoranda to a high-level delegation from the Election Commission of India (ECI) led by Chief Election Commissioner Sunil Arora, made the case for synchronous elections as the States shared contiguous areas with the Union Territory.

Puducherry PCC president A. V. Subramanian, in a memorandum said the Congress would, if allowed to by the party high command, boycott the election to press for Statehood for Puducherry and urged the ECI to take this up with the Government of India.

Raising the issue of the barricading of areas around the Raj Nivas to provide protection to Lt. Governor Kiran Bedi, the memorandum said the measure, besides creating unnecessary panic among officers and the general public, could impede free movement of residents and political parties during electioneering. It urged for ensuring free movement of people in these now barricaded areas. Pointing out that the Lt. Governor had twice in the past been cautioned by the ECI for “interference” in the electoral process, the memorandum appealed to the ECI to issue suitable instructions to the Lt. Governor well ahead of the imposition of the model code of conduct.

It also called for curtailment of movement of other State political parties’ personnel/leaders in Puducherry at least 48 hours before conclusion of campaigning as their presence could create law and order issues and illegal interference in electioneering.

The DMK and the CPI raised the undemocratic manner of the BJP-led Centre unilaterally nominating partymen as nominated MLAs.

In a memorandum, DMK representative R. Siva, MLA, drew attention to the appointment of three nominated legislators by the Central government as per the Union Territories Act 1963 Part II Rule 3 and Sub Class 3, which “was invalidating the principles of democracy”.

The memorandum submitted that the Centre had forcibly taken 10% of the 30-member strength and urged the ECI to raise the issue with the Law Commission, Parliament and the Constitutional Bench of the Supreme Court.

The CPI, represented by A.M. Saleem, said the Centre’s unilateral appointment of nominated legislators with all rights conferred on elected representatives and without any consultation with the State Government, made a mockery of the very objectives of Parliamentary democracy.

The nominated members are activists of the ruling party at the Centre and could potentially play a vital part in destabilising and even toppling a democratically-elected Government, the memorandum said.

The AIADMK, in its memorandum submitted by A. Anbalagan, legislature leader, sought same-day synchronous elections in Puducherry, along with polls in Tamil Nadu and Kerala, as the Union Territory shared borders with both States.

It also wanted a proportionate increase in the number of booths in relation with the increase in electors to 10.03 lakh from 9.41 lakh in 2016 Assembly election.

Noting that number of booths had not seen a matching increase, especially under the shadow of the COVID-19 pandemic, the AIADMK wanted polling booths having over 1,000 voters to be bifurcated to ensure social distancing.

The party’s other demands included appointment of Tamil-proficient officials as Chief Electoral Officer and District Election Officer and a thorough re-verification of electoral rolls to purge names of deceased persons.

In a separate memorandum, Om Sakthi Sekar, also of the AIADMK, called for strict measures to prevent distribution of freebies to entice voters. It also sought the constitution of special field teams to weed out an estimated 7,000 bogus voters from the electoral rolls. 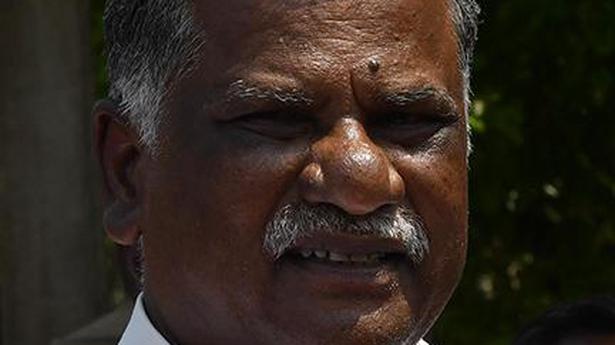 Pongal gift announcement is like offering bribe for votes: Mutharasan