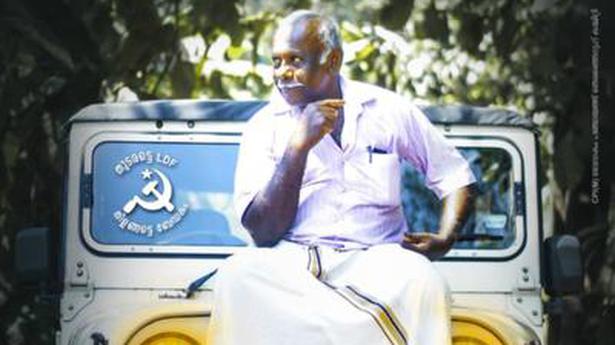 
Until a few days ago, Bedadka grama panchayat may not be a known place for those outside Kasaragod. However, with local body elections approaching, not only the place but also candidates of the Left Democratic Front (LDF) are grabbing attention.

Simple and innovatively designed posters that highlight candidates in real-life settings seem to have done the trick for them, with many going viral on social media.

Chembakkad Narayanan, contesting from Ward 3, says he is being identified by many after he put the posters on Facebook. One of the posters captures him, perched on the bonnet of a jeep, with his name in bold letters in the background. “These new posters were unlike the past, which portrayed candidates standing with folded hands, smiling faces, and party symbols in the background,” he says.

“However, after the posters went viral, I need no introduction and people recognise me immediately when I reach out to them seeking votes,” he said.

The same is the case of candidates in 16 other wards, like D. Vathsala, who come from various fields and professions. Contesting from Ward 5, posters show her working on a sewing machine at her workplace.

“Earlier, posters had a disconnection with the masses. But with these posters coming out, people are connecting to us,” Ms. Vathsala observed.

Similarly, M. Gopalkrishnan, contesting from Ward 7, is shown talking to an old woman. Likewise, P. Vasantha Kumari, who represented the nation at the Asian Masters Athletics Championship, is shown running on a riverbank in tracksuit and H. Shankaran, an artisan, busy at his unit.

The campaign is the brainchild of a group of youngsters, part of a youth coordination committee, given the task of election campaign. They decided to come up with something which voters will remember for long.

“The idea to show the candidates in real-life setting and to connect them with the people was mooted by the youngsters,” says D. Suresh, convener of the committee.

Interestingly, none of those who worked behind the poster campaign are professionals. For instance, the photographs were taken by an amateur photographer, Vipin Churikode, who borrowed the camera from his friend. Adarsh, who knew Photoshop, worked on the background of the posters. It was a joint effort that helped to bring out such posters, Mr. Suresh added.