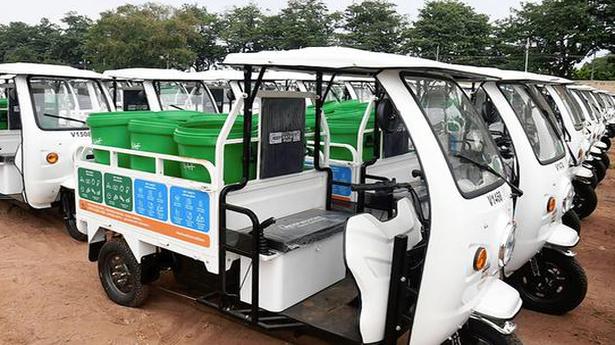 
The Greater Chennai Corporation will launch private conservancy operations in the Sholinganallur zone on December 10.

The private operator, Urbaser Sumeet, has been asked to complete the hiring of staff for garbage clearance in the zone. The operator has hired at least 7,000 workers for various zones. The number of conservancy workers required for the Teynampet, Kodambakkam, Adyar, Sholinganallur, Perungudi, Alandur and Valasaravakkam zones has been put at 11,000.

Corporation Chief Engineer N. Mahesan said the Corporation had directed the private operator to ensure door-to-door collection in a systematic manner in Sholinganallur.

The operator has hired 443 sweepers for nine wards of the zone. Previously, 900 conservancy workers under the National Urban Livelihoods Mission and 300 permanent workers of the Corporation and 145 additional workers were deployed in the zone.

All the 300 permanent workers of the Corporation were transferred on Tuesday from Sholinganallur to Tondiarpet, Royapuram, Thiru Vi Ka Nagar and Anna Nagar after the conservancy operations were privatised in Sholinganallur.

The 145 additional workers have also been shifted from Sholinganallur.

The civic body has increased the bins and improved the mechanisation of garbage clearance in Sholinganallur. “We have placed 717 bins. Earlier, there were just 500 bins. As many as 192 battery-operated vehicles have been deployed. We will get segregated garbage from residents. We request residents to help the conservancy workers in waste segregation,” said an official.

The Corporation has been receiving complaints for a month from residents about inadequate sweeping of roads in zones like Teynampet.

Another challenge to the conservancy operations in the privatised zones is the reluctance of workers manning battery-operated vehicles to cooperate with residents’ associations in waste segregation. Residents have said Urbaser Sumeet has recruited many autorickshaw drivers to run the battery-operated vehicles, and these drivers are likely to quit after the lockdown is relaxed further and schools are reopened next year.

Hence, they have requested the Corporation to hire additional drivers to prevent any disruption in services.