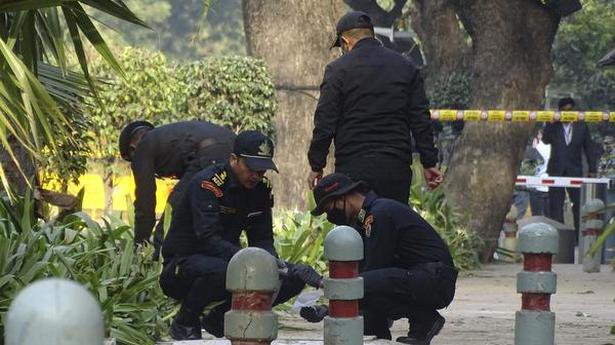 “The investigation into the blast near the Israeli embassy has been handed over to the NIA,” a Home Ministry official said

The Ministry of Home Affairs (MHA) has handed over to the National Investigation Agency (NIA) the probe into the blast near the Israel embassy in New Delhi, officials said on February 2.

A minor IED blast took place near the Israeli Embassy in the heart of Lutyens’ Delhi on January 29 evening. No one was injured.

“The investigation into the blast near the Israeli embassy has been handed over to the NIA,” a Home Ministry official said.

Some cars were damaged in the explosion that occurred about 150 metres away from the embassy on the Dr. A.P.J. Abdul Kalam Road in the very high-security Lutyens’ bungalow zone.

Prime Minister Narendra Modi spoke to his Israeli counterpart Benjamin Netanyahu on February 1 to convey his strong condemnation of the terror attack and asserted that India will deploy all its resources to find and punish the perpetrators.

Both leaders, the PMO said, expressed satisfaction about the close coordination between Indian and Israeli security agencies in connection with the blast probe.

Also read: We had raised the level of alert, not surprised by IED blast near embassy: Israeli envoy

The Israeli Foreign Ministry said all its diplomats and embassy staff in Delhi are “safe and sound”. When Vizagapatam was at the forefront of astronomy