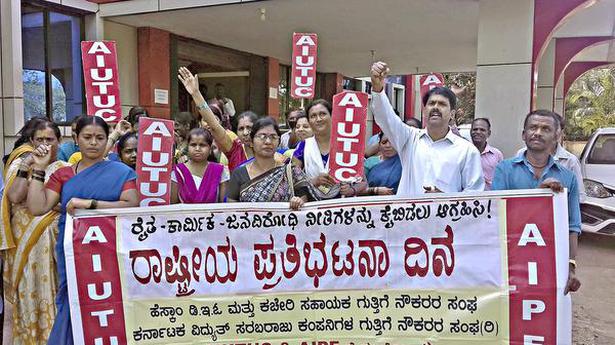 
Seeking repeal of the Power Bill 2020 and terming it as being against the interests of farmers, people and power corporation employees, a demonstration was staged here on Wednesday.

The demonstration was organised by members of the All India Powermen Federation (AIPF) and the All India United Trade Union Congress (AIUTUC) in front of the office of Hubballi Electricity Supply Company (HESCOM) at Navanagar in Hubballi in response to a call for a nation-wide agitation.

Addressing the protestors, president of the Dharwad district unit of AIUTUC Gangadhar Badiger said that after penetrating BSNL and railway sector, the privatisation policy has entered the power sector too. “The Union government wants to privatise the power sector at one stroke, which is highly condemnable,” he said.

He said that with this move, the power sector which was hitherto an essential service will become a profitable commercial service. Consequently, the employees who have the status of government employees will become private company employees. And, the contract workers will be subjected to hire and fire policy, he said.

He said that a privatisation exercise in the State of Odisha has resulted in the employees becoming scapegoats with the private company shunning its responsibility of providing gratuity and other benefits.

Mr. Badiger said that in Uttar Pradesh the employees have successfully fought against such a privatisation move. AIPF and employees associations of KPTCL and HESCOM should take inspiration from the agitation in Uttar Pradesh and proceed towards fighting for their rights without making any compromise, he said.