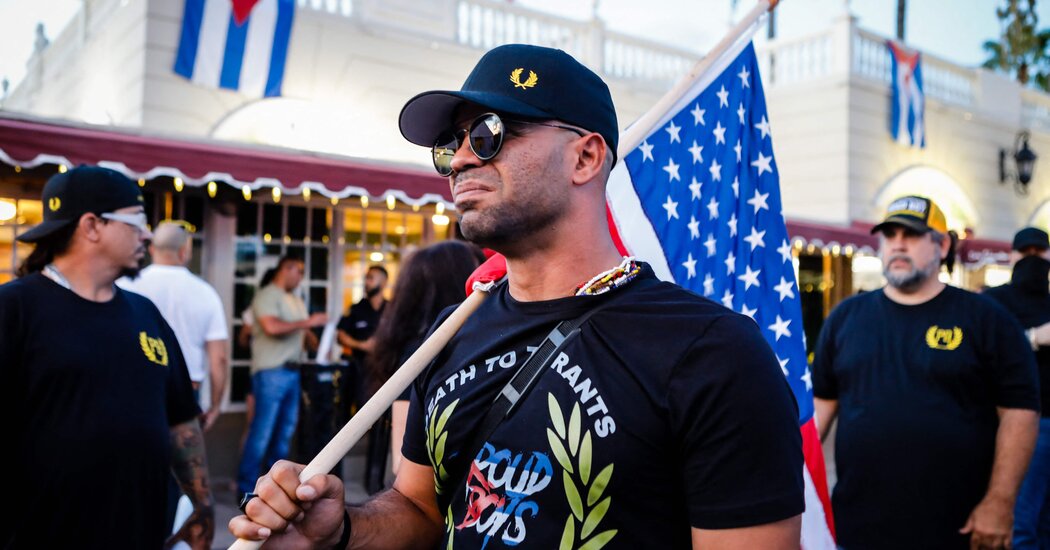 
Enrique Tarrio, the former chairman of the Proud Boys, and four other members of the far-right group were indicted on Monday for seditious conspiracy for their roles in the storming of the Capitol on Jan. 6 of last year, some of the most serious criminal charges to be brought in the Justice Department’s sprawling investigation of the assault.

The sedition charges came in an amended indictment that was unsealed in Federal District Court in Washington. The men had already been charged in an earlier indictment filed in March with conspiring to obstruct the certification of the 2020 presidential election, which took place during a joint session of Congress on Jan. 6, 2021.

The new indictment marked the second time a far-right group has been charged with seditious conspiracy in connection with the Jan. 6 attack. In January, Stewart Rhodes, the leader and founder of the far-right Oath Keepers militia, was arrested and charged along with 10 others with the same crime.

The charge of seditious conspiracy — which can be difficult to prove and carries particular legal weight as well as political overtones — requires prosecutors to show that at least two people agreed to use force to overthrow government authority or delay the execution of a U.S. law. It carries a maximum sentence of 20 years in prison.

It was not immediately clear what evidence led to the new charges, but the indictment underscored the central role played by the Proud Boys in the effort to forestall President Donald J. Trump’s defeat and “oppose the lawful transfer of presidential power by force” by storming the Capitol.

The group and its actions around the Capitol will be central to the narrative being pieced together by the House committee investigating the attack and Mr. Trump’s efforts to overturn the election results, two people familiar with the committee’s plans said on Monday.

When the committee on Thursday evening holds the first in a series of public hearings scheduled for this month, the two people said, it intends to present live testimony from Nick Quested, a British documentarian who was filming the group with its permission during the riot, and from Caroline Edwards, a Capitol Police officer who was injured, according to videotape of the incident, by a rioter who had been in a conversation moments earlier with one of the Proud Boys indicted on the sedition charge.

Mr. Quested spent a good deal of the postelection period filming members of the Proud Boys, including Mr. Tarrio, and is considered by the committee likely to have been a witness to their conversations planning for Jan. 6. Mr. Quested had accompanied the Proud Boys to pro-Trump rallies in Washington in both November and December 2020, and was on the ground with members of the group on Jan. 6 when several played a crucial role in breaching the Capitol.

Mr. Quested was also present with a camera crew on the day before the attack, when Mr. Tarrio met in an underground parking garage near the Capitol with a small group of pro-Trump activists, including Mr. Rhodes of the Oath Keepers. Late in the day on Jan. 6, Mr. Quested and his crew were with Mr. Tarrio in Baltimore, filming him as he responded in real time to news about the riot.

Ms. Edwards, a well-respected Capitol Police officer, is believed to be the first officer injured in the attack, and suffered a concussion during the assault.

Other officers around the building recall hearing Officer Edwards on the radio calling for help — one of the first signs that day that the mob violence was beginning to overwhelm the police. Months after the attack, Officer Edwards continued to have fainting spells believed to be connected to her injuries.

Ms. Edwards did not respond to a request for comment on Monday. In an email to The New York Times in December, she said that “Capitol Police officers have had an extremely hard year, but I’ve seen more resiliency within the department than I ever thought possible.”

The updated indictment offered few new facts, largely recounting previous accounts contained in earlier charging documents. Among those were one about how Joseph Biggs, one of the defendants charged with seditious conspiracy, had a brief exchange in the moments before the violence erupted with a man in the crowd, who subsequently walked alone toward a barricade outside the Capitol and confronted the police.

That man, Ryan Samsel, has been charged with attacking officers at the barricade in what is widely thought to be the tipping point of the riot, with videotape showing him attacking Officer Edwards. Mr. Biggs has denied inciting Mr. Samsel.

In the weeks that followed Mr. Tarrio’s arrest, and the last indictment against him and his co-defendants — Mr. Biggs, Ethan Nordean, Zachary Rehl and Dominic Pezzola — there have been several developments that could have provided investigators with a deeper understanding of the Proud Boys’ preparations on Jan. 6 and their movements on the ground that day.

Another Proud Boy lieutenant originally charged in the same case with the men, Charles Donohoe, pleaded guilty in April and is cooperating with the government’s inquiry into the group.

Around the time of Mr. Tarrio’s arrest federal investigators also searched the homes — and seized the phones — of three other high-ranking Proud Boys identified as unindicted co-conspirators in the case. But none of the men — Jeremy Bertino, Aaron Wolkind and John C. Stewart — have been charged.

When Mr. Rhodes, the Oath Keepers leader, and 10 of his subordinates were charged in January with seditious conspiracy, prosecutors said they had taken part in a plot to forcibly stop the lawful transition of presidential power by sending men into the Capitol on Jan. 6 and by establishing a heavily armed “quick reaction force” outside of Washington that was prepared to rush to the aid of their compatriots at the building.

A charge of seditious conspiracy requires prosecutors to prove that force was used either to overthrow the government or to interfere with the execution of federal law.

Unlike Mr. Rhodes, however, Mr. Tarrio was not in Washington on Jan. 6. He had been ordered to leave the city by a local judge two days earlier after being charged with burning a Black Lives Matter banner at a church during a spree of violence that had followed a different pro-Trump rally in December.

Federal prosecutors have said that even though Mr. Tarrio was not accused of “physically taking part in the breach of the Capitol,” he nonetheless “led the advance planning and remained in contact with other members of the Proud Boys” during the storming of the building.

Prosecutors have claimed, for instance, that Mr. Tarrio had issued orders before the attack for members of the group to leave behind their traditional black-and-yellow polo shirts and remain “incognito” when they arrived in Washington on Jan. 6. Mr. Tarrio also helped create a “command and control structure” on a private Telegram group chat calling itself the Ministry of Self Defense, prosecutors say.

As the riot at the Capitol unfolded, Mr. Tarrio appeared to take credit for the Proud Boys’ role in what was happening. “We did this,” he wrote at one point on the Telegram group chat.

Lawyers for Mr. Tarrio and the other men have repeatedly claimed there is no evidence that they conspired in advance to storm the Capitol. By setting up the group chat and taking other measures like acquiring protective gear, the Proud Boys were simply trying to guard themselves against leftist activists with whom they had scuffled at earlier events in Washington, the lawyers said.

Still, prosecutors have said that one week before the Capitol attack, one of Mr. Tarrio’s girlfriends gave him a document titled “1776 Returns,” containing a detailed plan to monitor and storm government buildings near the Capitol on Jan. 6 — though not the Capitol itself. People familiar with the document have said that the girlfriend sent texts to Mr. Tarrio comparing the plans in the document to the storming of the Winter Palace in St. Petersburg, which helped set off the Russian Revolution in 1917.

In the latest indictment, prosecutors cited what appears to be a newly discovered text exchange from the evening of Jan. 6, after the attack on the Capitol had ended, between Mr. Tarrio and Mr. Bertino. Mr. Bertino, a prominent Proud Boy member from North Carolina, had been stabbed at an earlier pro-Trump rally in December, and like Mr. Tarrio was not in Washington on Jan. 6.

At one point, Mr. Bertino made a reference to “1776,” prompting Mr. Tarrio to respond minutes later, “The Winter Palace.”

“Dude,” Mr. Bertino then wrote, “did we just influence history?”

Mr. Tarrio answered: “Let’s first see how this plays out.”

Mr. Bertino responded: “They HAVE to certify today! Or it’s invalid.” 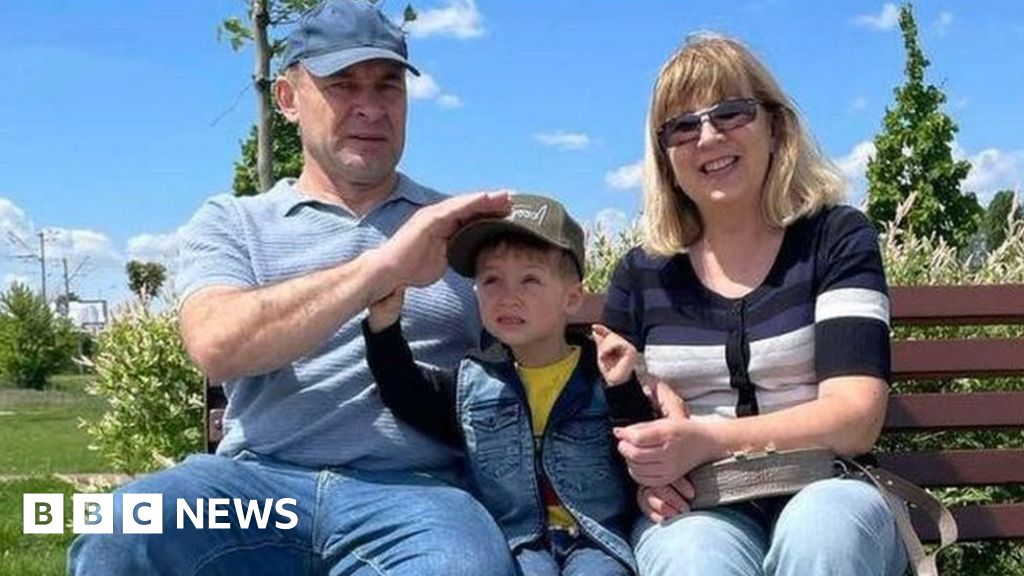 Ukraine war: One shell that destroyed a family 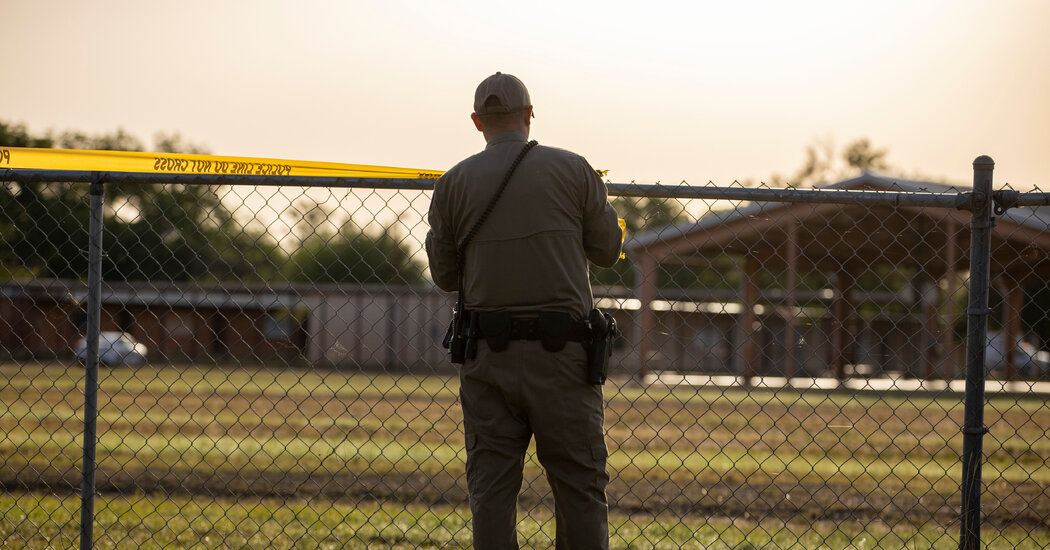 Uvalde Had Prepared for School Shootings. It Did Not Stop the Rampage.