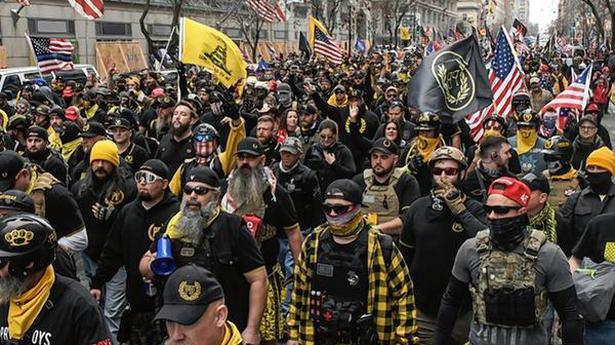 
Proud Boys, stand back and stand by, Donald Trump, then President of the U.S., said during the first presidential election debate in September last year, after he was challenged by the moderator to condemn white supremacism. The far-right men’s group of self-described “western chauvinists”, which has grown in notoriety since has recently been in the news for its visible involvement in the January 6 attack on the U.S. Capitol.

The group, which until recently strongly supported Mr. Trump, was started by British-Canadian Gavin McInnes in 2016, when he launched its New York chapter. Mr. McInnes, who was described by The New York Times in 2018 as “a former Brooklyn hipster turned far-right provocateur”, also co-founded digital media company Vice in 1994 and was associated with it until 2008.

The Proud Boys is a male-only group known to espouse racist and misogynistic views. In a 2017 article, Mr. McInnes wrote: “We [white men] brought roads and infrastructure to India and they are still using them as toilets. Our criminals built nice roads in Australia but Aboriginals keep using them as a bed.”

Over the years, the group has also been involved in several street confrontations across the U.S. with Antifa, an amorphous network of anti-racist, anti-fascist organisations. One such fight occurred in Washington DC in December, two days before the Electoral College was scheduled to certify Joe Biden’s victory in the presidential elections.

Last week, Canada, where Mr. McInnes grew up, officially designated the Proud Boys as a terrorist organisation, adding it to a list with names like the Islamic State, Boko Haram, the Taliban and Al-Qaeda on it. The listing says, “Members of the group espouse misogynistic, Islamophobic, anti-Semitic, anti-immigrant, and/or white supremacist ideologies and associate with white supremacist groups. The Proud Boys consists of semi-autonomous chapters located in the U.S., Canada, and internationally.”

Now that it is listed, members who commit violent crimes could be charged with terror-related offences in Canada and financial assets linked to the group can be frozen.

Canadian Public Safety Minister Bill Blair said there had been an escalation in violence in the aftermath of the U.S. elections by various groups, including the Proud Boys. Ideologically motivated extremism was the greatest threat to Canadian domestic security, as per Mr. Blair. He said the U.S. Capitol attack of January 6 initiated a political response, but the decision itself was a legal call, according to Politico. Henry ‘Enrique’ Tarrio, the 30-something Cuban American chairman of the Proud Boys, said Canada’s move was “ridiculous.” “It’s infringement of free speech rights. All the Canadian Proud Boys have ever done is go to rallies,” Mr. Tarrio said, as per the Associated Press.

Mr. Tarrio was arrested on January 4 — two days before the Capitol attack — for possessing high-capacity firearm magazines and for burning a Black Lives Matter flag outside a Washington DC church in December. (He is out on bail awaiting trial). It has also emerged that about a decade ago, Mr. Tarrio, after a previous arrest, had repeatedly cooperated with law enforcement and the FBI in their pursuit of over a dozen alleged criminals, according to court records analysed by Reuters. His lawyer described him as a “prolific cooperator” as per court records. Mr Tarrio has denied this, as per the Reuters report.

Trouble is brewing for the group in the U.S. too as the FBI investigates its role in the U.S. Capitol attack. Some group members were identified from videos and pictures (including selfies) taken during the riot. Four cases have been registered against six members, according to the New York Times, although no case has been registered against the group as a whole, as per the Washington Post. The charges against individuals include conspiracy, obstruction of an official proceeding (the certification of the 2020 election), as well as theft and destruction of government property.

Apart from this, the U.S. is conducting a domestic extremism review and will await the results of that process before deciding on whether to declare the Proud Boys a terrorist organisation, Press Secretary Jen Psaki said last week.