British Foreign Secretary Dominic Raab will meet with External Affairs Minister S. Jaishankar and other ministers on Tuesday as part of a three-day visit to India, expected to prepare for an expected visit by British Prime Minister Boris Johnson next month.

India has invited Mr. Johnson as a guest for the Republic Day celebrations on January 26. While the British Prime Minister’s visit has not been confirmed yet, Mr. Raab, who is the United Kingdom’s Secretary of State for Foreign, Commonwealth and Development Affairs, would discuss a range of agreements including the upgradation of the relationship to a “Comprehensive Strategic Partnership”, to be signed during Mr. Johnson’s visit, officials told The Hindu.

“India and the United Kingdom enjoy a strategic partnership since 2004 which has been marked by regular high-level exchanges and growing cooperation in diverse areas,” said a statement by the Ministry of External Affairs (MEA) announcing the visit from December 14-17.

“Mr Raab’s visit will pave the way for further strengthening of the partnership across trade, defence, climate, migration and mobility, education and health sectors in the post-Covid, post-Brexit context,” it added.

The U.K. Foreign Secretary (who is the equivalent of the British Foreign Minister) will be accompanied by the Permanent Undersecretary of the Foreign Office Philip Barton, who was, until recently, the High Commissioner of the U.K. to India.

Mr. Raab’s visit comes days after Mr. Johnson’s controversial remarks in the U.K. parliament that seemed to confuse India-Pakistan tensions with the ongoing farmers’ protests at the Delhi borders. The U.K. Prime Minister’s office later clarified that he had “clearly misheard the question”, adding that the British Foreign Office is “following the issue of protests in India closely”.

Neither the MEA nor the British High Commission responded to a question on whether the issue or the U.K.’s comments would be discussed during Mr. Raab’s visit.

According to the officials, India and the U.K. will discuss the framework of the Comprehensive Strategic Partnership, which will include the defence and strategic relationship, Indo-Pacific policy, trade, and cooperation on renewable energy ahead of the PM’s visit.

Mr. Johnson’s visit to India will be one of his first forays abroad in 2021, after U.K. formally leaves the European Union (EU), and officials are hopeful of an announcement that India and the U.K. would begin talks for an “early harvest” Free trade Agreement (FTA) during the visit.

A mutual defence logistics support agreement is in an advanced stage of negotiation, while a Government-to-Government (G2G) mechanism for defence deals and a defence training Memorandum of Understanding (MoU) are also in the works. In addition, the two sides may conclude a Defence Technology and Industrial Capability Cooperation (DTICC) agreement, the MoU for which was signed in April 2019.

Government sources said the two countries are close to signing a G2G agreement on jet engine technology development. The U.K. has also made a pitch to India for joint technology development of sixth generation fighter technologies which can go into India’s fifth generation Advanced Medium Combat Aircraft as well as offered the design of its Queen Elizabeth class aircraft carrier for Indian Navy’s proposed second indigenous carrier. The aircraft carrier HMS Queen Elizabeth would be in the Indian Ocean next year on its maiden deployment.

Mr. Raab will also meet with Environment Minister Prakash Javadekar and Education Minister Ramesh Pokhriyal on Tuesday, and will leave for Bengaluru on Wednesday. Prime Minister Narendra Modi is expected to travel to Glasgow for the next UN Climate Change Conference (COP26) in November 2021, and both sides are keen to expand their partnership on fighting global warming and building renewable energy technologies, officials said. 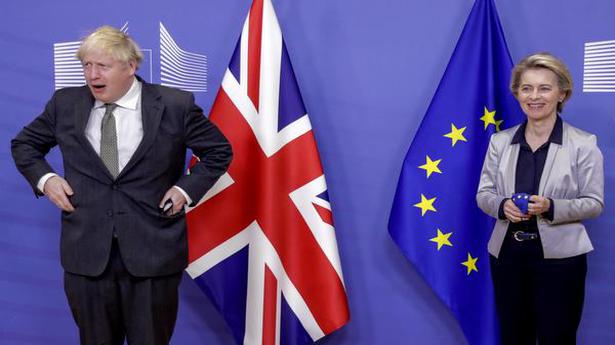