Karnataka
February 18, 2021 Divya Bharat 0 Comments and Davangere., Belagavi, BengaluruThe call for a nationwide ‘rail roko’ campaign by farmers’ leaders in Delhi against the Centre’s farm laws evoked a mixed response in Karnataka on Thursday. In Bengaluru, but there was a good turnout of protesters in Raichur, the protest was low key


The call for a nationwide ‘rail roko’ campaign by farmers’ leaders in Delhi against the Centre’s farm laws evoked a mixed response in Karnataka on Thursday. In Bengaluru, the protest was low key, but there was a good turnout of protesters in Raichur, Belagavi, and Davangere.

The nationwide protest to demand the repeal of the three farm laws had no impact on train services in the State. The Bengaluru police as well as their counterparts in places such as Mysuru and Belagavi detained protesters even before they could enter the stations. The Railway Police Force, too, were out in full force to prevent protesters from entering stations. At Yeshwantpur railway station, farmers’ leader Kurubur Shanthakumar and others were detained by the police. Mr Shanthakumar had travelled from Mysuru to Yeshwantpur by train to take part in the protest, but was escorted out of the station.

“The PM is functioning at the behest of corporate bodies. He should protect the interests of farmers and repeal the farm laws. As promised in the Rajya Sabha, the Prime Minister should convene a meeting with farmers and resolve the issues. The Central government should enact a law on minimum support price and repeal the laws which are against the interests of farmers. If it fails to do that, farmers will intensify the protest,” said Mr Shanthakumar.

In Bengaluru division, farmers tried to enter railway stations such as Bangapret and Tumakuru. In other parts of the State, protests were carried out in districts such as Belagavi, Yadgir, Shivamogga, and Vijayapura.

Chief PRO of South Western Railways (SWR) E. Vijaya said the protest did not impact passenger train services. “Elaborate security arrangements were made at the stations. Train services were operated as per schedule in SWR limits,” she said. 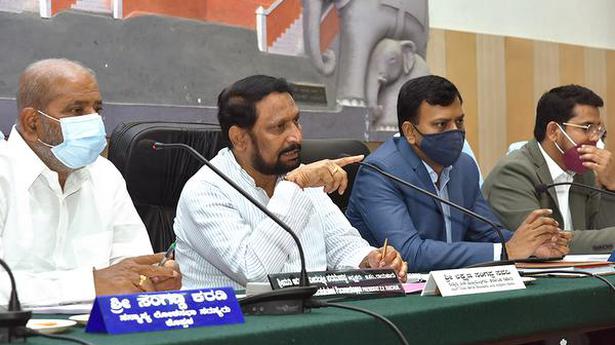