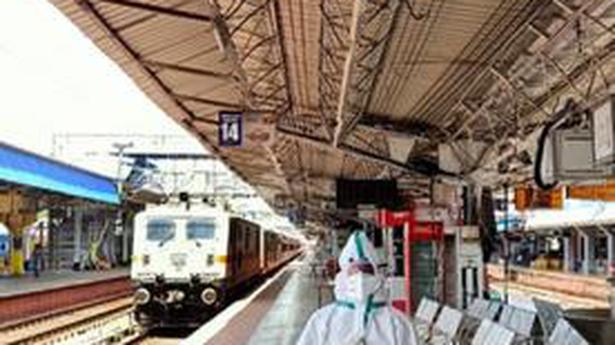 
While ensuring the safety of passengers and the railway staff, the Thiruvananthapuram Railway Division will give top priority to improving the patronage of trains, including long-distance ones, that still hovers around 35% and to increasing goods traffic.

“The continuing poor patronage for inter-city trains and the long-distance express trains to places such as New Delhi is a concern as the revenue had been hit badly by the pandemic-induced lockdown. The priority is to increase the traffic and patronage while ensuring the safety of passengers and railway personnel,” R. Mukund, Divisional Railway Manager (DRM), told The Hindu.

Railways are maintaining vigil as SARS-CoV-2 cases are being reported among its personnel in Thiruvananthapuram and Kollam.

“The decision to operate more long-distance trains, unlock measures and relaxations are expected to fetch us more traffic in the coming days,” Mr. Mukund said.

The divisional railway is yet to regain the lost ground in the shipment of parcel cargo.

“Of late, there has been an improvement in the movement of parcel goods and essential commodities from here through the railway network. But it is nowhere near the figures during the corresponding period last year,” the DRM said.

To enhance goods train traffic and enhance earnings, Railways have already reached out to logistic service providers to transport fruits, rubber and other products, Kerala Automobiles for ferrying e-autos, FACT, and DP World, the operators of the Vallarpadam container transshipment terminal.

“We have approached Adani Vizhinjam Port Private Ltd. to make use of Kochuveli to transport boulders needed for the 3.1-km breakwater of the deepwater terminal at Vizhinjam,” Mr. Mukund said.

The Divisional Railway Manager said there was huge potential for the ‘roll on, roll off’ (RoRo) service for trucks from West Hill in Kozhikode to Ernakulam.

Already Southern Railway, in collaboration with Konkan Railway Corporation, had conducted a trial run of the RoRo service for trucks between Surathkal in Karnataka and Kozhikode.

Technical feasibility of operating RoRo services up to Ernakulam was being explored. Besides fetching revenue for Railways, this would help decongest the road corridors, he said.

Anger boils over at medical colleges across State