Almost all 200 small and big waterbodies in Narikudi block were brimming with water following a good rainfall in the last few months.

“Farmers did not use the water from the tanks in the last few weeks as it has been raining frequently so that tanks had water to their full capacity,” said an officer.

Sharp showers that started at around 10.30 p.m. on Wednesday continued till the early morning of Thursday and a huge flow of water breached bunds, Mr. Balakrishnan, former president of Ezhuvani panchayat, said. Standing crops on a vast extent of paddy fields have been destroyed. Water gushing in huge quantity washed off crops which were ready for harvest. Some crops that were over three months old were about to be harvested. “Since it was raining in the last few days, we could not harvest the crop. Now, the flood water has destroyed them,” he added.

With water from upstream continuing to flow into tanks, officials could not move earth movers closer to the breached tanks to plug the leak.

“We have kept sand bags ready and once the flow of water slows down, we will try to plug the breaches,” said Tiruchuli Block Development Officer, N. Sathyamoorthi.

Joint Director of Agriculture S. Uthandaraman said that officials would inspect villages and survey the nature and extent of damage to the crops on Friday. 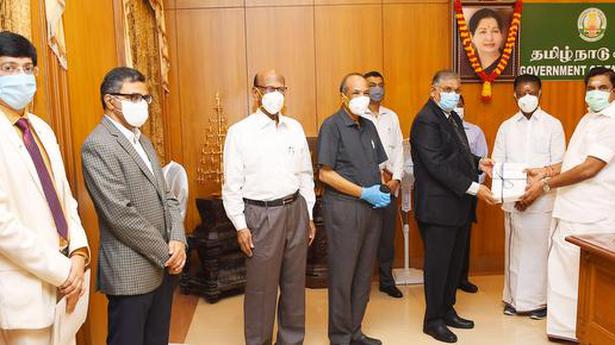