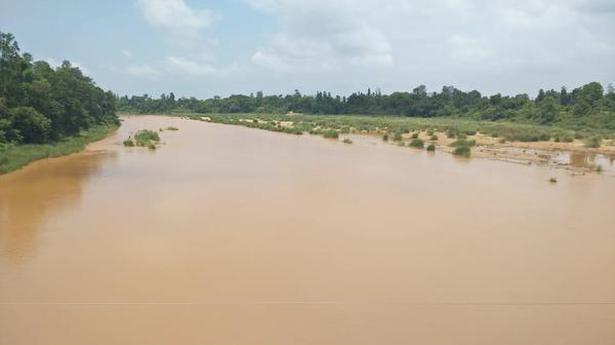 
Drought-hit Srikakulam and Vizianagaram districts could get much-needed relief with decent inflows into major rivers such as Nagavali, Vamsadhara, Champavati and other water bodies following recent rains in the catchment areas. The Vamsadhara river, which is the lifeline for Srikakulam district, almost dried up due to deficit rainfall. However, in the wake of rains in past two days, it received 42,550 cusecs of water on Wednesday.

In anticipation of more inflows in the next couple of days, 46,596 cusecs of water was released from the Gotta barrage. It is expected to benefit many areas of Srikakulam, Narasannapeta and other mandals. The Suvarnamukhi river, a tributory of the Nagavali brims with abundant water for the first time in current rainy season.

The inflow was 21,071 cusecs to the Gorle Sriramulu Naidu Madduvalasa Reservoir and 23,410 cusecs was released from it. It would provide irrigation facility for nearly 24,711 acres of land under its jurisdiction. The Nagavali river received 32,800 cusecs of water at Narayanapuram anicut on Wednesday. Thotapalli barrage near Parvatipuram received 6,921 cusecs of inflows and outflow was 7,546 cusecs.

Vengalaraya Sagar Project of the Suvarnamukhi river near Saluru of Vizianagaram district get 3,700 cusecs and outflow was 1,800 cusecs. Thatipudi reservoir, which provides water to Vizianagaram town, received 3,878 cusecs. Many ponds located both in Vizianagaram and Srikakulam districts are receiving inflows from the local catchment areas.

According to officials, agriculture activity is likely to pick up in the next couple of days. Required moisture in soil will benefit standing crops.

Vizianagaram Collector M. Hari Jawaharlal has directed the irrigation officials to be cautious till next couple of days since more inflows might lead to inundation of low-lying areas of the respective areas. He has asked the Vizianagaram municipal authorities to give top priority to cleanliness in all streets which were battered by rains on Monday and Tuesday. He said that paddy got damaged only in 90 acres and maize was damaged in 50 acres.