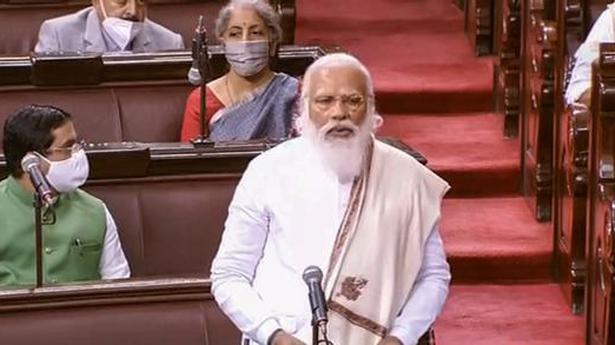 PM asks other members of the Upper House to follow Congress leader’s example of non-abrasive brand of politics.

Prime Minister Narendra Modi showered fulsome praise on senior Congress leader and leader of the Opposition in the Rajya Sabha Ghulam Nabi Azad, asking other members to follow his example of non-abrasive brand of politics. He also used the opportunity to take a dig at internal differences within the Congress.

Mr. Azad is retiring on February 15 and will deliver his farewell speech on Tuesday.

While addressing the House in response to the motion of thanks debate, Mr. Modi appreciated Mr. Azad for praising his government for conducting the civic polls polls in Jammu and Kashmir.

He said Mr. Azad is a soft-spoken and polite person. “Ghulam Nabi ji is not known to use harsh words and I believe everyone here must learn from him. I respect him for this. He congratulates us for the elections in Kashmir.”

Mr. Modi said that while he was happy that Mr. Azad had praised his government, he cautioned the Congress not to do the opposite, just because Mr. Azad has said so. “I hope that your party will take it in the right spirit. They shouldn’t make the mistake of doing just the opposite considering it as the view of G-23,” he said. His comments left the Treasury benches in splits.

Mr. Azad faces an uncertain political future. Since the demotion and dissolution of the Jammu and Kashmir Assembly, there is no Rajya Sabha seat available from there. The next available seat in the House is from Kerala, the election to which is two months away. With Mr. Azad unofficially leading the G-23 group, which argued for reforms in internal working of the Congress and elections to the post of party president, it is still up for debate on whether he will win a renomination to the House.

Already the Congress corridors are abuzz with the names of his successors. Mallikarjun Kharge, who was the leader of the Opposition in the Lok Sabha in 2014-19, is one of the front runners.