Taking exceptions to pro-Karnataka concerns expressed in November, Agriculture Minister and Koppal in-charge B.C. Patil has said that the fight for the protection and the development of Karnataka and Kannada should continue throughout the year.

“As we have been witnessing, concerns for Kannada and Karnataka are overwhelmingly shown in November only when the State observes Rajyotsava to mark the formation of a linguistic State. We need to continue the same zeal and commitment throughout the year,” he said.

He was addressing a gathering at the Rajyotsava celebrations after hoisting the national flag at the district stadium in Koppal on Sunday.

Strongly holding that the use of a language in daily life was the only way to protection it and to ensure its development, Mr. Patil urged Kannadigas to use Kannada among themselves as well as with others in the State. He also expressed concerns over the increasing influence of other languages in different parts of the State.

The Minister recalled the consistent efforts by those who fought for a State for Kannada-speaking people such as Alur Venkata Rao and hailed the former Chief Minister D. Devaraj Urs for his efforts to rename Mysore State as Karnataka on November 1, 1973.

Mr. Patil released a leaflet containing information about insurance for rabi crops. Tableaux prepared by the departments of Health and Family Welfare, Horticulture, Women and Child Development, Agriculture, Transport, among others, on various topics to spread awareness among people were displayed. Tableaux on COVID-19 prepared by the Transport Department and Health Department bagged the first and second prizes, respectively. The Agriculture and Horticulture departments got the third prize.

Earlier, contingents of the Civil Police, the District Armed Reserve Police, the Home Guards, the Bharat Seva Dal, NCC and Scouts and Guides participated in a parade. 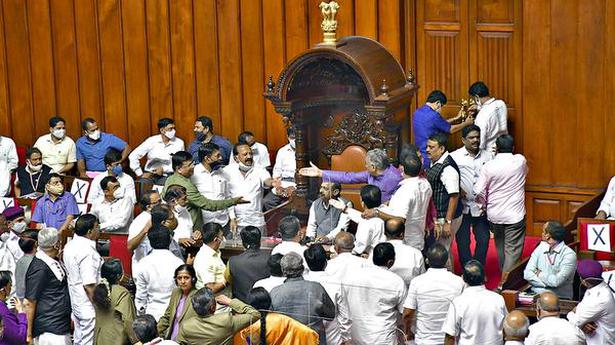 Council ruckus: Special panel to be formed to conduct probe