It was a day of immense joy and pride for Nayanan C.C., a Health Department employee-cum- paddy farmer from Thirumala ward in Alappuzha municipality on Friday.

Back in July, he sowed paddy — Uma variety in five acres and Rakthashali variety in half an acre — on leased land at the Kombankuzhy padasekharam (paddy field), spread over 110 acres. His fellow farmers cultivated Uma variety in the rest of the land.

Then came the floods and the paddy field was submerged on August 7. When the waters receded after three weeks, paddy cultivated in 109.5 acres at Kombankuzhy was destroyed.

Although the portion where Nayanan sowed Rakthashali, a nearly extinct variety of rice, too was inundated, the rice variety withstood the flood.

On Friday, rhythmic harvest songs resonated from the Kombankuzhy padasekharam as the fully grown paddy in half an acre was hand-harvested in the presence of farmers, scientists, and environmentalists.

“It was a very good harvest,” says, Nayanan, who is also an external research scholar at the Department of Sociology and Social Work, Annamalai University.

“It was my first tryst with the Rakthashali variety. I had decided to cultivate Rakthashali in an organic way in half an acre after knowing about its medicinal value. When the floods inundated the entire field for 21 days, I thought everything was washed away. When the floodwaters receded, paddy in 109.5 acres was destroyed. But, much to the surprise of everyone Rakthashali survived,” he adds.

After it survived the floods, several experts and environmentalists visited his paddy field. Rose Mary Francies, Professor (Plant Breeding and Genetics) and Head, Department of Seed Science and Technology, College of Horticulture, Thrissur, says that a scientific study is under way to know whether the variety is flood-resilient.

“Rakthashali is known for its medicinal characteristics. No studies or references so far point that the variety to be submergence tolerant. When I visited Kombankuzhy after the floods, it looked like a resilient crop. Based on the Kombankuzhy experience, we have started evaluating the submergence tolerance of the rice variety,” Ms. Francies says.

Rakthashali, with red husk and grain, is considered uneconomical compared to high-yielding rice varieties. Nayanan bought the Rakthashali seeds from M.K. Sebastian, a farmer based at Kaduthuruthy. 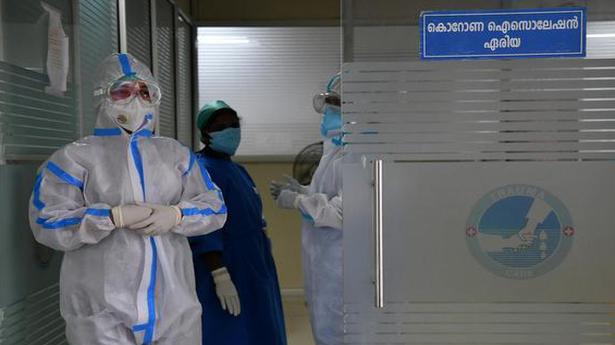 Only rapid antigen test for retesting