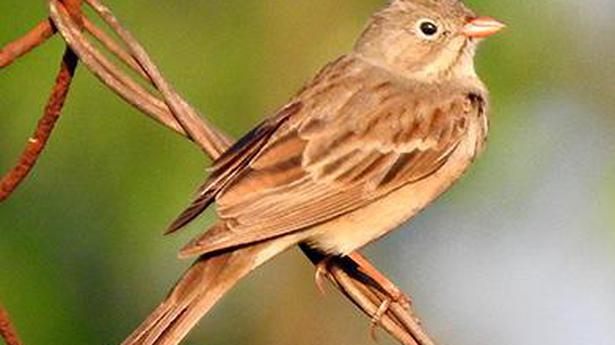 Yellow-Billed Babbler, Green Sandpiper, and Grey-Necked Bunting were some of the avians spotted

A team of birdwatchers spotted 108 species of birds in the sprawling campus of Mangalore University during the campus bird count (CBC), which is a part of Great Backyard Bird Count organised by the Bird Count of India, a few days ago.

The count was conducted from February 12 to February 15 on the 353-acre campus.

KARNATAKA , MANGALURU : 19/02/2021 : The bird photo captured by Vivek Hasyagar, The Green Sandpiper spotted in the campus of Mangalore University during the campus bird count conducted from February 12 to February 15, 2021. PHOTO: SPECIAL ARRANGEMENT

According to Sreepada K.S., chairman, Department of Applied Zoology in the university, the Yellow-Billed Babbler, the Green Sandpiper, and the Grey-Necked Bunting are the new additions to the avian list of the campus. With this, the CBC of the university has so far recorded a total of 146 species in the campus in six years. Some of the birds recorded this year included the Black Drongo, the Black Kite, the Brahminy Kite, the Common Iora, the Green Wabler, the Purple-Rumped Sunbird, the Red-Whiskered Bulbul, the White-Cheeked Barbet, the Jungle Babbler, and the Plum-Headed Parakeets.

The Ashy Drongo, the Booted Eagle, the Grey Wagtail, and the Indian Pitta are the migratory birds. The Grey-Headed Bulbul (near threatened bird), the Rufous Babbler, and the Flame-Throated Bulbul are the endemic birds of the Western Ghats and the Barn Owl, the Spotted Owlet, the Nightjars (Savanna, Indian and Jerdon’s), and the Sri Lanka Frogmouth, the nocturnal birds, were recorded.

However, some of the species like the Jerdon’s Leafbird, the Thick-Billed Flowerpecker, the Coppersmith Barbet, the Stork-billed Kingfisher etc., sighted in the previous years were not seen in the present survey.

This year, the event was co-ordinated by Vivek Hasyagar, a research scholar in the Department of Applied Zoology in the university, and Maxim Rodrigues, a bird watcher, from Kasaragod.

Survey trails were carried out by 54 participants including students, research scholars and faculty members from various departments of the university. Some of the bird enthusiast from St. Aloysius College, Mangaluru, Manipal Institute of Technology, Manipal and some local people also participated in the CBC.