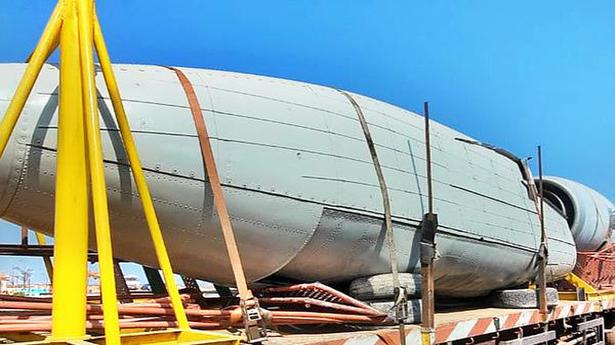 
The Andhra Pradesh Urban Infrastructure Asset Management Limited (APUIAM) has commenced the reinstallation of the decommissioned aircraft TU-142 M on the three-acre campus proposed to develop an aircraft museum on the Kakinada beach in East Godavari district.

The Godavari Urban Development Authority (GUDA) is developing the museum which would display one of the three decommissioned TU-142 aircraft. The two other TU-142 aircraft are being displayed at the aircraft museums in Kolkata and Visakhapatnam.

“Several parts of the TU-142 aircraft have arrived in Kakinada by road from the INS Rajali Naval Air Station in Tamil Nadu. The reinstalling exercise has already commenced. It is expected to be completed within a week,” said APUIAM senior manager Chetan Yarlagadda on Thursday.

The refurbishment and renovation works are targeted to be completed by the March-end, he said, adding that a team of experts from Tamil Nadu-based Taneja Aerospace and Aviation Limited (TAAL) are reinstalling the aircraft, he added.

The TAAL experts have set up the aircraft museums in Kolkata and Visakhapatnam. The museum project at Kakinada was delayed due to lockdown induced by coronavirus pandemic.

On Thursday, GUDA Vice-Chairman A. Raveendranath and the APUIAM team held talks on the feasibility of completing the project within a few weeks. According to GUDA authorities, the length of the TU-142 aircraft is 53 metres and width is 50 metres. The height of the 100-tonne weight aircraft is 12 metres.

14 killed as mini-bus collides with lorry near Kurnool

‘Lack of cancer awareness leading to rise in mortality’