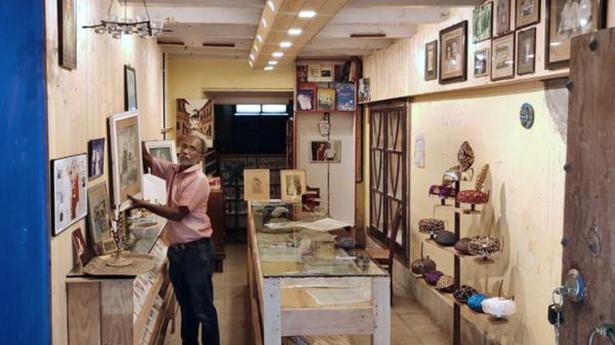 
A stopover at Sarah Cohen’s embroidery shop at Jew Town in Mattancherry was mandatory for most visitors to the heritage town after their visit to the famed synagogue that dates back to approximately 450 years.

Lucky among them got to chat with Sarah, who sat facing the street, almost always engaged in embroidery work.

Over a year since she died at the age of 96, leaving the Jewish community there with just two members, her aide Thaha Ibrahim — a middle school dropout from nearby Fort Kochi — is readying a gallery to showcase her memorabilia for visitors.

The collection includes a photograph of Sarah taken in 1937 when she was studying at the St. Teresa’s school here. A framed painting of her mother, Kitty Cohen, adorns the wall nearby. Then there is a collection of photographs of Sarah and her husband Jacob Eliyahu Cohen, who worked in the Income Tax Department and died in 1999.

Mr. Ibrahim then showed another of Sarah’s treasured possessions on display — a sewing machine from Singer Hemstitcher she got as the first wedding anniversary gift from her husband in 1943. “Sarah aunty also preserved its instruction manual, which though worn out, is still readable. She had a knack to preserve everything,” he said.

Mr. Ibrahim has panelled the walls of the shop using treated oak wood, to check moisture from the walls spoiling the photographs and other items that once adorned her house located next door. “Though the couple did not have children, Sarah aunty was very fond of her nieces and nephews, especially children of her sister Honey Rosemberg,” he said, pointing to a black-and-white photograph of the family.

The other black-and-white pictures include that of a bride being led to the synagogue in a Jewish wedding procession, Sarah playing cards with women beside the street, and that of Jews from Israel calling on her. The most recent among the memorabilia is that of Prince Charles calling on her during his Kochi visit in November 2013 with his wife Camilla Parker Bowles.

Sarah’s embroidery store once sold traditional head-scarves and shawls while she also embroidered decorative pieces of cloths for the synagogue and for Jewish brides. She will be remembered as among the few who chose to stay back at Mattancherry even as most others left for Israel.