The Telangana government has ordered reopening of educational institutions from class nine upwards from February 1.

He asked Collectors to ensure that the institutions were ready for academic activity by January 25. All the institutions, hostels, residential schools and toilets on their premises must be cleaned up by the deadline as they had remained unused for a long time due to pandemic.

The stock of rice, pulses and other cooking material which was left untouched in hostels due to their closure must be checked up for rottenness. Ministers must personally check the facilities at SC, ST and BC hostels , a release said.

The conference discussed extensively the haphazard maintenance of revenue records before formation of Telangana. In this context, Mr. Rao reminded officials that it led to clashes and disputes over land ownership. The State government made several attempts to establish the ownesrhip of every gunta of land.

The revamp of land records taken up by the State government, issue of new pattadar passbooks and enactment of new revenue law led to emergence of a clear picture about the ownership of lands.

Mr. Rao expressed satisfaction that the Dharani portal of land transactions which was developed for transparency, corruption free land administration and check delays was a complete success. Yet, required changes for greater flexibility in transactions of agricultural lands must be made in the portal within a week.

He asked Collectors to personally look into all revenue related issues for instant redressal of grievances. The mutation for registrations already done should be completed forthwith. They must accept fresh applications for pending mutations and complete the process within a week.

To make Dharani more user friendly, Mr. Rao sought a provision in the portal for registration of lands in favour of NRIs on the basis of their passport numbers. The issue of passbooks to companies and societies for lands purchased by them should also be facilitated in Dharani.

He also asked Collectors to resolve disputes covering land transfer regulations in agency within a month. The list of prohibited lands for transactions must be revised at regular intervals.

TS to use every drop of river water: CM 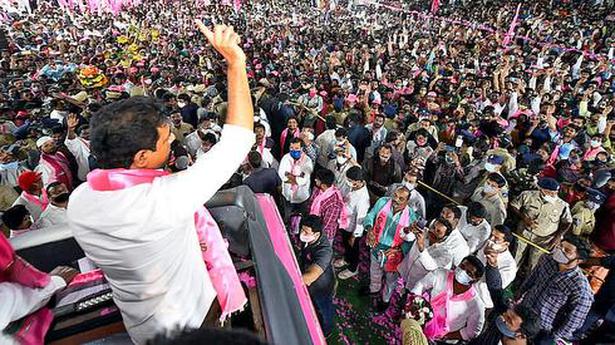 BC community hall becomes a bone of contention