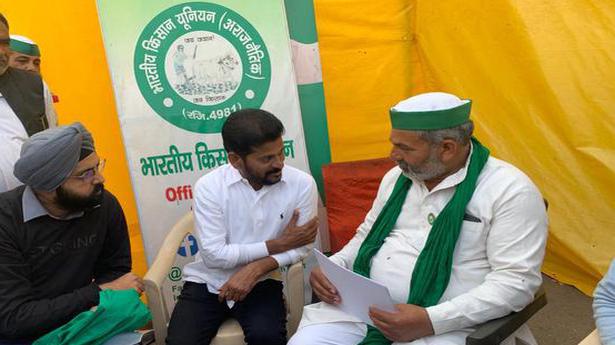 
Member of Parliament from Malkajgiri and Telanganga Pradesh Congress Committee working president A. Revanth Reddy visited the farmers protesting at the Ghazipur border of New Delhi to meet the farmers leader Bharatiya Kisan Union (BKU) national spokesperson Rakesh Tikait and invited him to visit Telangana and participate in a farmers’ rally to be held next month.

Mr. Reddy also briefed Mr. Tikait about his 10-day Rajiv Rythu Bharosa padayatra in Telangana in support of the ongoing agitation of farmers and the fears of farmers on their future when the new laws come into effect in toto.

He later told the media that Mr. Tikait agreed to visit Telangana to address the meeting of farmers as well as the farm labourers who feared their future was being compromised with the new agriculture laws of the Central government. He said the new laws should be put to extensive discussion at the ground-level and in every village and Prime Minister Narendra Modi should sincerely consider the sentiments of the farmers.

Officials told to gear up for paddy and cotton procurement