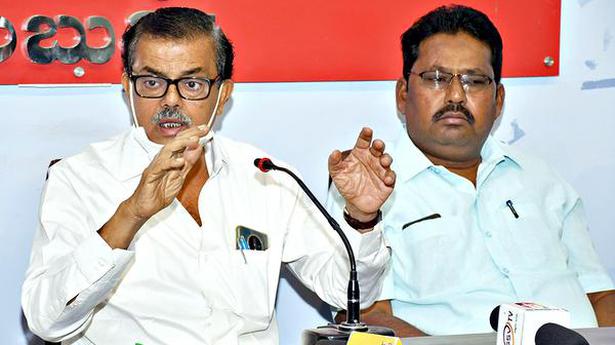 
The Samyukta Kisan Morcha will stage a rasta roko at Ram Mandir Circle here on Saturday, in response to a nation-wide call given by the morcha against anti-farmer, anti-labour policies of the Union government.

Members of various pro-farmer, pro-Dalit, pro-labour, pro-woman, student and youth organisations will participate in the rasta roko under the aegis of the Samyukta Kisan Morcha.

CPI(M) leader M.B. Sajjan and All India Kisan Sabha leader Bheemashankar Madiyal, addressing presspersons here on Thursday, demanded that the Union government effect a complete repeal of the three contentious farm laws, as the 11th round of talks between agitating farmers and the government ended without any outcome.

The cases filed against farmers leaders and journalists for reporting on the tractor rally should be withdrawn.

The government should also release the tractors and vehicles of farmers seized during the agitation.

Mr. Sajjan accused the government of barricading several places over the last week. Concertina wires have been used to cover vast stretches and at Tikri and Ghazipur, the police have also put up metal spikes on roads leading to the protest sites.

Construction of cement slabs at various junctions has cut off access for farmers to portable toilets. Farmers at Singhu have said that water supply to the protest site has been hit for a week.

The morcha will continue to protest till the farm laws are withdrawn, he added.