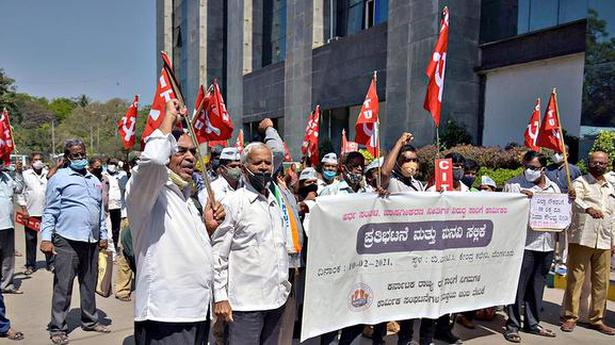 
Road Transport Corporation employees staged a protest on Wednesday with a list of demands including timely payment of salaries, reduction in work hours and restarting operations for the entire fleet of BMTC buses. They also want BMTC to drop its plan to lease electric buses from private operators.

Due to poor fare revenue after COVID-19, Road Transport Corporations (RTCs) have been relying on the State government for the salaries of over 1.3 lakh employees, who are yet to get full salaries for the months of December and January.

Later in the day, union leaders from the Joint Forum of Road Transport Corporation Employees’ associations, met the chairperson and MD of BMTC. H.D. Revappa, a union leader said, “During the interaction, we were assured that pending salaries will be credited in a week. We were also told that our demand to reduce work hours from 12 to eight will also be looked into.”

To reduce its financial burden, BMTC had recently introduced a general shift where bus crew had to work for 12 hours with a break of three to four hours in between. Many female conductors had appealed to the State government seeking a return to pre-COVID-19 work hours.

BMTC chairman N.S. Nandiesha Reddy told The Hindu that a decision has already been taken to reduce work hours for female employees to eight hours. “I had a meeting with them in this regard. There are 1,500 women conductors working in the corporation, and in their interest we will introduce eight-hour shifts for them,” he said. He said that since the pandemic, the State government has paid salaries for nine months and pending salaries of the staff would be paid when transport corporations received the funds.

Meanwhile, the KSRTC Staff and Workers Federation, in a letter addressed to the Deputy Chief Minister and Transport Minister Laxman Savadi, demanded that the State government merge all four RTCs into one, allocate ₹1,000 crore in the budget to RTCs, pay staff their salaries and exempt them from paying toll.

Solar projects may come under lens