In the previous session, the rupee had slipped 4 paise to settle at 72.97 against the U.S. dollar

The rupee gained 10 paise to settle at 72.87 (provisional) against the U.S. dollar on Feb. 9 on the back of sustained foreign fund inflows and weak American currency.

At the Interbank Foreign Exchange (Forex), the local unit opened sharply higher at 72.87 against the dollar. During the session, the unit touched a high of 72.85 and a low of 72.92. It finally settled at 72.87, registering a rise of 10 paise against the greenback.

In the previous session, the rupee had slipped 4 paise to settle at 72.97 against the U.S. dollar.

“Indian rupee gained strength amid weakness in Dollar and rise in risk appetite in the global markets. Market sentiments improved on the expectation that stimulus packages, easy monetary policies and progress in vaccination programme would boost economic growth.

“Further, consistent FII inflows supported Rupee. However, the sharp upside was prevented on a surge in crude oil prices. Rupee may trade in the range of 72.65 to 73.30 in next couple of sessions,” Saif Mukadam, Research Analyst, Sharekhan by BNP Paribas said.

Foreign portfolio investors (FPIs) were net buyers in the capital market as they purchased shares worth ₹1,876.60 crore on Feb. 8, as per exchange data.

The dollar index, which gauges the greenback’s strength against a basket of six currencies, declined 0.42% to 90.57.

Meanwhile, the global oil benchmark Brent crude was trading 0.50% higher at $60.86 per barrel. 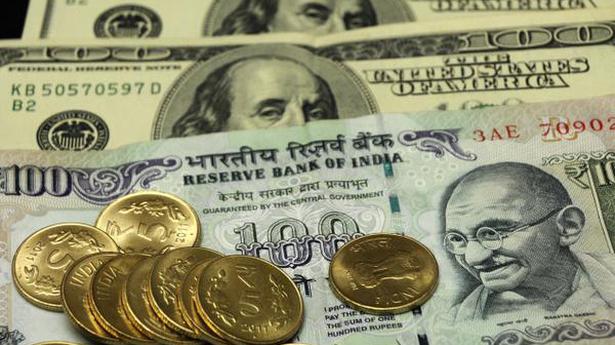 Rupee slips 13 paise to 73.15 against US dollar in early trade