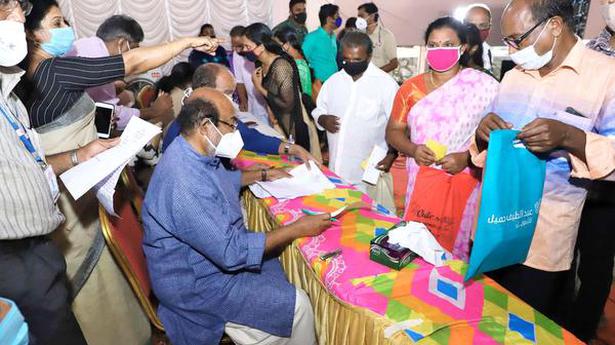 
Varkala resident Sulfiker is a heart patient. He also has hernia-related problems. He was advised surgery by the hospital where he receives treatment. In severe financial straits, he was wondering what his options. At the government’s Santhwana Sparsham adalat on Tuesday, Sulfiker was sanctioned ₹25,000 for the surgery.

Shaji Lal of Nagaroor who was suffering from a condition that causes his bones to crumble received ₹15,000 at the adalat.

The adalat, at Government Boys Higher Secondary School, Attingal, is being held to speedily dispose of grievances. Complaints from Varkala and Chirayinkeezhu taluks were being taken up in the morning and afternoon sessions, respectively. Ministers J. Mercykutty Amma and T.M. Thomas Isaac inaugurated the adalat at which 1.517 complaints were taken up. MLAs V. Joy and B. Sathyan were present at the inauguration.

The physically challenged, those with heart and kidney problems, and people with many other ailments, reached the adalat. Many of them were in financial difficulties caused by COVID-19 and were unable to meet their treatment costs or even day-to-day expenses. They were provided with treatment assistance from the Chief Minister’s Distress Relief Fund (CMDRF) and returned home satisfied that Ministers had directly heard them and disposed of their complaints without any delay.

Radhakrishnan of Kallambalam who returned to the State after 20 years following an accident at his workplace abroad was abandoned by his family when he developed heart and other problems.

He spent his nights sleeping on shop verandahs, with the welfare pension from the government as his income. At the adalat, Ms Mercykutty Amma directed the Life Mission district coordinator to take a decision on Radhakrishnan’s rehabilitation and announced ₹20,000 from the CMDRF for his treatment.

Visually challenged Ravi from Nagaroor was taken aback when Mr. Isaac asked him how much money would he need to complete his house. He replied ₹1.5 lakh, which was sanctioned. Mini of Alamcode reached the adalat with aid from the Welfare Society for the Blind. She had taken a loan to build a house and had fallen behind on repayments. The Minister assured her of steps to stop the recovery proceedings.

In all, more than ₹1.04 crore was given as assistance from the CMDRF.