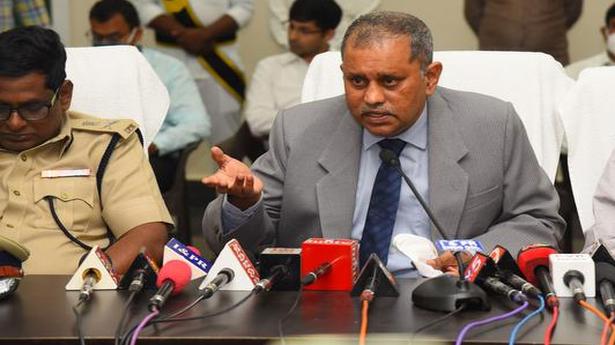 ‘It will go a long way in checking malpractices; call for unanimous election ill-motivated’

Defending the launch of e-Watch app to check electoral malpractices, State Election Commissioner N. Ramesh Kumar has reiterated that unanimous election in panchayats advocated by a few parties is against the spirit of the Constitution and democracy, and is ill-motivated.

Addressing the media after reviewing the election preparedness in Nellore and Ongole on Thursday, Mr. Ramesh Kumar urged people to make use of the app available on Google Play Store to lodge complaints of enticements.

“The app will go a long way in curbing electoral malpractices such as distribution of liquor, cash, gifts during the elections,” Mr. Ramesh Kumar said, and added that he himself would look into the complaints and direct the officials concerned to take swift action to ensure free and fair elections.

Shadow teams would closely monitor the movement of people, especially political party leaders from outside the villages who try to influence the voters, he said. Special attention would be paid to the villages identified as sensitive and hyper-sensitive, he added.

Mr. Ramesh Kumar noted with satisfaction that the number of sarpanches decided uncontested had come down when compared to the 2013 elections as the deadline for withdrawal of nominations for the first phase of the gram panchayat elections concluded.

He observed that the democratic system would get weakened if the sarpanch and ward member seats were decided on unanimous basis.

He opined that democracy would be strengthened only when more aspirants, especially those from the weaker sections of society, contested the elections.

“When there can be a contest during the Assembly and Lok Sabha elections, why unanimous election should be there at the village-level?” he asked, and brushed aside the view that a contest in the local body elections would lead to rivalry and groupism and scuttle development.

Exhorting the officials to strengthen democracy by ensuring that the voting percentage went up in the elections being held after a ruling by the Supreme Court and in accordance with the Constitution, Mr. Ramesh Kumar directed them to ensure that the village volunteers were not involved in the process.

Expressing happiness that the incidence of COVID-19 had come down, he wanted the officials to take all precautions during the conduct of elections to prevent spread of the virus.

Nellore District Collector K.V.N. Chakradhar Babu said the district election machinery had taken steps to conduct the four-phase elections starting with 163 panchayats in the Kavali division in a transparent manner.

Prakasam Superintendent of Police Siddharth Kaushal said police personnel were drafted to beef up security during the elections.