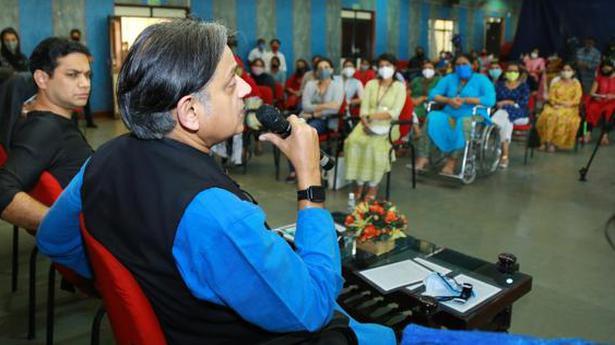 
Older people are making decisions for a young majority in the country, Shashi Tharoor, MP, has said.

“India is already 51% under the age of 25. This is your country. You are the majority. But do you get a say in what is actually done to rule the country,” he asked students of St. Teresa’s College at an interactive session on Monday. Mr. Tharoor pointed out that the country held the world record for the average age of the population at 27, and the average age of the cabinet at 63. “There is no country with a bigger gap,” he said.

On the increasing need to involve the youth in decision-making process, Mr. Tharoor recommended enhanced support for women entrepreneurs. “Women are actually in many ways capable than men in the vast number of tasks that entrepreneurs require. We have to provide possibilities, guidance, education and incentives to the young entrepreneurs. The earlier concept of secure government jobs is over as the mentality of the youth has changed. The governments are also not in a position to offer secure jobs,” he said.

Stating that “we have allowed ourselves to be complacent with the old Kerala model”, Mr. Tharoor said there had been an excessive satisfaction of how well the State was doing. The remittance-dependent Kerala economy had been laid bare with the fading of the Gulf boom and the return of the expatriates, he added.

The Congress leader also suggested the need to have gender awareness from an early age and improved facilities for the differently abled communities. “Be prepared for some resistance as we have to carefully work out your views into the State policy,” said Mr. Tharoor, while referring to the enthusiastic responses from the students. Clued In #233 | Time is full of surprises and heady prizes