War of words erupts between parties; Deputy CM was not present at the time of incident; six arrested

The Aam Aadmi Party (AAP) on Thursday alleged that “BJP goons” attacked Deputy Chief Minister Manish Sisodia’s residence earlier in the day when he was not present at home.

The party claimed that the attack was carried out with the support of Delhi Police which was present at the spot. Six persons have been arrested and a case has been registered, said Delhi Police PRO Eish Singhal.

While the AAP shared a video of the purported attack, the BJP, which had organised a protest outside Mr. Sisodia’s residence for allegedly being part of a plot to “kill” Mayors sitting on a dharna outside Chief Minister Arvind Kejriwal’s residence over the last four days, countered it by stating that the “real” protest was peaceful and the video shared as evidence by the party was “fake.”

Mr. Kejriwal soon entered the fray of what snowballed into a political war as he took on Defence Minister Rajnath Singh over the issue of attacks on political leaders in a democracy.

Mr. Kejriwal responded to Mr. Singh’s tweet asking “Rajnath ji, don’t you think that a violent attack on Delhi’s Deputy Chief Minister’s residence in the presence of police is wrong? Why is there so much anger in the BJP over the support of the farmers’ movement by the Aam Aadmi Party and the Delhi government? [sic]”

Earlier in the day, addressing a press conference, AAP chief spokesperson Saurabh Bharadwaj said, “When the Deputy Chief Minister was not present at his house, BJP workers, who can be called BJP’s goons, attacked his house when only women were present.”

The party also showed CCTV videos of a group of protesters entering the gate of Mr. Sisodia’s residence. Delhi police is under the ambit of the Central government and not the AAP-ruled Delhi government. AAP leader Atishi said that the attackers had “police protection”.

Mr. Bharadwaj claimed that the police officers, who were responsible to protect the residence of Deputy Chief Minister, had prior information of the attack and intentionally removed the barricade so that the BJP supporters can enter his house.

“Even after entering the premises of his residence, the protesters were not arrested by the police. Other officials who were present there got them out of the premises,” Mr. Bharadwaj told The Hindu.

Delhi BJP vice-president Ashok Goel Devraha, who led the protest outside Mr. Sisodia’s residence, alleged the video shared by the AAP is fake. “Our protest was peaceful. As far as the video is concerned, the time stamp on it is from July this year; the AAP has become so desperate that it first stages such incidents and then uses them to seek attention,” he said.

Delhi Police, meanwhile, said that they had received request from Delhi BJP regarding organising a protest outside Mr. Sisodia’s residence on Mathura Road which they rejected as no gathering or protest is allowed due to the COVID-19 pandemic.

At 11.30 a.m., a group gathered at a barricade installed by Delhi Police near Deputy CM’s house. A group of protesters jumped over the barricades and entered the camp office of Deputy CM located in the house.

The police officers on duty acted swiftly and held six persons who trespassed and were taken to Mandir Marg police station.

“We have received a complaint on the matter from Deputy CM’s secretary at Tilak Marg police station. An FIR has been registered into the matter under relevant sections of IPC. The CCTV footage of the incident will be examined,” said Mr. Singhal. 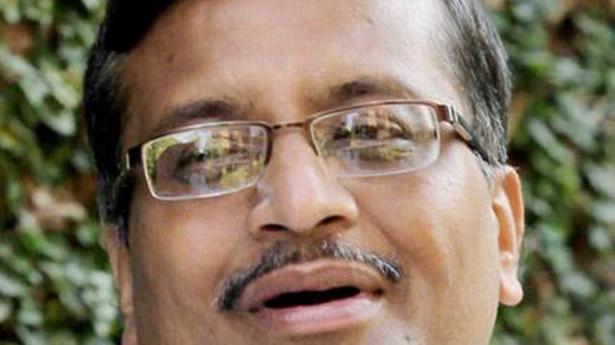 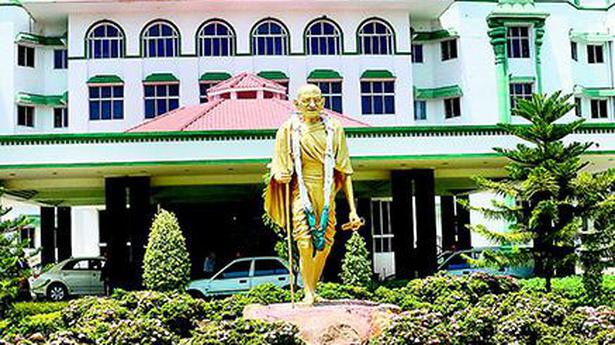